The Voodoo Mask, also known as the Mask, is a character in The Messenger. In Picnic Panic, he becomes a resident of the shop after collecting 4 Voodoo Feathers and 10 Voodoo Mask Pieces and then interacting with the altar that appears in the shop after reaching Voodoo Heart for the first time. The Voodoo Mask occasionally tells jokes, and he also offers Ninja "THE DEAL" in New Game +.

The Voodoo Mask looks similar to a traditional voodoo mask of African/Haitian origin, albeit with a much lighter color scheme and exaggerated facial features. The Mask is light yellow, with turquoise lips and eyelids. Colorful Voodoo Feathers decorate the top of his head, resembling slicked hair.

The Voodoo Mask is very cheerful and prone to telling jokes, which are often puns, much to the dismay of The Shopkeeper and Ninja who make sarcastic remarks on his jokes, leaving him in a grumpy state.

If the Voodoo Mask is created or transferred to a New Game + file, Ninja can interact with the Mask and agree to "THE DEAL."

In New Game +, the Voodoo Mask offers Ninja "THE DEAL," offering triple attack power and double health in exchange for Quarble's life. If Ninja agrees to the "THE DEAL," Quarble appears, enraged that he would sell his soul so casually and promptly attempts to call off the deal. However, the Voodoo Mask says "THE DEAL" cannot be called off, and then casts a voodoo magic spell, which terrifies Quarble. After the spell ends, Ninja receives the benefits of "THE DEAL," along with altering his appearance into that of the Dark Messenger. Quarble is surprised that he was not sacrificed, and the Voodoo Mask explains that voodoo magic is fueled by fear, so he only needed Quarble to think that he was about to die. Ninja attempts to apologize, but Quarble cuts him off and berates him, stating that he will no longer revive Ninja, and then leaves.

The Voodoo Mask occasionally tells 1 random joke, pulling from a pool of 24 different jokes. For a particular save file, 6 hours must pass in real life (based on the computer clock) before he tells his next joke (assuming the game has been saved). The Voodoo Mask's overworld sprite will have a grin to indicate that he has a new joke available. 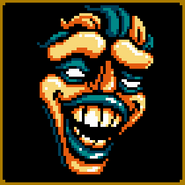