Voodkins are characters in the Picnic Panic DLC of The Messenger. They are small creatures native to Voodkin Island. Some Voodkins are peaceful while others are hostile.

The six different Voodkin types have varying distinguishable features, but Voodkins are typically small and round. They are extremely similar in body type to Phobekins.

Barlie Chowns are peaceful mask-wearing Voodkins that like to dance. They don't attempt to attack Ninja.

Guile Piles are tall stacks of Voodkins that walk back and forth. Ninja can climb a Guile Pile harmlessly and ride upon it to reach where he needs to go.

Blow Dart Voodkins hide in the trees and pop out to shoot blow darts at Ninja.

Diving Voodkins stand on high ledges. When Ninja walks within an approachable distance, they hop off and dive downward with their harpoon. Sometimes they are dropped from the sky by Red Beach Parrots.

Flamethrow Voodkins use a tiki torch as a flamethrower in order to attack Ninja. 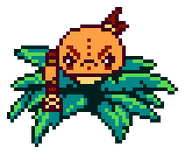