The Underworld is the twelfth area of The Messenger. It is an underground area filled with lava, and it serves as a base for demons.

After Ninja completes the Evil Manfred boss fight, he falls from Cloud Ruins and ends up in the Underworld. After completing the Barma'thazël boss fight, he rides Manfred out of Underworld and returns to Ninja Village. Later on in the game, Ninja can return to the Underworld from Searing Crags if he has the Lightfoot Tabi.

The Underworld is a red and orange-themed underground area filled with orange lava and red demon statues.

In a room with rising and falling lava with a swinging spike pendulum, wait for the lava to recede and climb down to the bottom of the room. Head left a couple of rooms to reach the Power Seal room.

In 8-bit, in the first shop checkpoint room, head right into the next room. In the upper-right corner are two breakable blocks. Break the blocks and head up into the Power Seal room. Navigate the air currents and avoid the sawblades to reach the Power Seal.

In 8-bit, in the room with the Scurubu, trigger the vertical spike platform to head right. Drop down through the lower-left platform and into the Power Seal room. Slash the Magic Fireflies for Cloudstep while heading right to reach the Power Seal.

In the lower-right corner of the room containing Power Seal #3, use "Aerobatics warrior" to destroy the breakable blocks. Head down into the next room which contains Power Seal #4. Either Cloudstep off of the Demon Hives or walk across the lava using the Lightfoot Tabi in order to reach the Power Seal.

** = Only occurs if you haven't previously encountered this dialogue in Cloud Ruins. 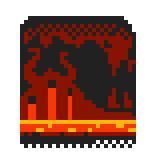