Sitting at the shop in the timeless void, The Shopkeeper offers upgrades, advice, and to those who ask, will even tell stories.

"Thanks for ruining the show. Can't you just enjoy the contrast?" ― The Shopkeeper

The Shopkeeper is a character in The Messenger. She is the first member of the Order of the Blue Robes, and she manages the shop that sells various upgrades to the current Messenger. The Shopkeeper has unique optional chat dialogue for various areas, and sometimes she has stories to share. Cabinet-related interactions can set The Shopkeeper off on long-winded cabinet rants.

Like the other members of the Blue Robes, The Shopkeeper wears a blue robe outfit and a necklace of round white beads; the outfit shrouds her face in darkness except for two glowing red eyes. She is taller than The Artificer but shorter than The Prophet.

The Shopkeeper is often condescending, dismissive, and snarky. However, The Shopkeeper is also generous enough to grant Ninja free mandatory shop upgrades when he reaches impassable road blocks. She also attempts to give Ninja helpful adventuring advice, such as information about new areas, tips on tackling bosses, and offering a scrying orb service for deciphering parts of The Prophet's prophecy. When asked, The Shopkeeper entertains adventurers with stories.

Ninja meets The Shopkeeper for the first time in Autumn Hills, where he is stuck in a pit due to not having the Climbing Claws. He enters the first shop checkpoint and finds himself inside the shop, encountering The Shopkeeper. The Shopkeeper introduces Ninja to the unfamiliar location and hands him the climbing gear so he can progress. After this, similar situations occur on Ninja's journey to Glacial Peak, and he is given the required Wingsuit in Howling Grotto and the Rope Dart in Searing Crags. Throughout his adventure, Ninja can interact with The Shopkeeper in order to purchase upgrades, or he can ask her for stories and area-related info. The Shopkeeper also pops up outside of the shop the first time Ninja collects a Power Seal or a Voodoo Mask Piece, explaining their purpose.

Later after Ninja passes on the scroll to Soldier, he is teleported to the shop. The Shopkeeper has Ninja put on a blue robe from the cabinet. She then leaves the shop via a magical opening on the left side of the shop connected to the Tower of Time HQ. Ninja takes over The Shopkeeper's role and runs the shop to serve as Soldier's shopkeeper. Not long later, The Shopkeeper checks in on Ninja's status, curious about why Soldier hasn't shown up in a while. She checks for Soldier in the shop's scrying orb and freaks out, implying that he died. The Shopkeeper retrieves the scroll from Soldier's corpse and convenes with the other Blue Robe members to figure out the next course of action. They decide to let Ninja fulfill the prophecy and return back to being a Messenger. Ninja leaves the Tower of Time HQ and is greeted by The Shopkeeper, who informs Ninja to make good use of his map. Ninja insists that he doesn't have a map, which leaves The Shopkeeper dumbfounded as she explicitly explains that Ninja's scroll is actually a map. After this, The Shopkeeper sells an expanded selection of upgrades and assists Ninja by using the scrying orb to pinpoint exact locations related to Prophet prophecies.

After Ninja collects the six remaining Music Notes, The Prophet teleports away to retrieve The Shopkeeper. The two arrive back on scene, and The Shopkeeper is amazed to learn that the curse might soon finally end. She uses the scrying orb to fill Ninja in on the backstory for the Music Box and the origins of the curse. She also warns him to be careful of Phantom's traps as he treads through the Music Box. After Ninja defeats Phantom, The Shopkeeper appears to evacuate everyone. She takes them back to the top of the Tower of Time, where she helps in the Arcane golem fight against the Mask.

When Ninja looks through the scrying orb for the first time, he sees some blurry figures. The Shopkeeper starts worrying and explaining to Ninja that they are not only fighting the demons in different times, they are also fighting them in different dimensions, and explains that some of these different realities can overwrite their own if the demons win in them, so Ninja offers to go directly to that reality and prevent the events from happening.

Interacting with the orb again after finishing the main game opens a portal, The Artificer enters the shop asking if a portal had just opened, as was indicated by his devices. The Shopkeeper tells him that it's fine and that he can go back to the lab, but he summons The Prophet accidentally and she tells Ninja go into the portal while she handles the duo.

After Ninja defeats Octo and reaches the beach, he arrives at the shop, which has been redesigned in a tiki-ish style, and The Shopkeeper is wearing a tiki girl dress. The Shopkeeper welcomes ninja to the shop and proceeds to tell ninja that she attuned his scroll so that he can see time rifts now, Ninja then can talk to The Shopkeeper or upgrade his equipment as usual.

When Barma'thething is defeated and the voodkins are freed, there is a celebration picnic, The Shopkeeper arrives and has a story to share. Once she finishes the story, she leaves, saying that she needs to get back to the shop.

Within the game's English script, The Shopkeeper is not referenced by gender. Outside of the game and within the ARG, various hints were thrown related to The Shopkeeper's identity. This is a timeline of the hints and teasers leading up to the reveal of The Shopkeeper's pronouns being "she/her."

Thierry Boulanger, the main director and writer of the game, wrote all of the dialogue for the English and Québécois scripts. The Messenger's game publisher, Devolver Digital, handled the translations for the other languages. Within the official The Messenger Discord, Thierry has mentioned on multiple occasions that even though he wrote both the English and Québécois scripts, only the English version of the script is canon, as it allows him to write around certain things. He did not elaborate any further, other than mentioning that it's related to The Shopkeeper.[1]

, as that statement incorrectly refers to The Shopkeeper as "he."

The community speculated about the identity of the mistake between the two remaining statements. There was some speculation about the important mistake being either "he" in the VoteTri

statement, or being "from Ninja's perspective" in the VoteX

statement. However, no consensus was ever reached. Since it's now known that VoteTri

is the statement that contains an important mistake, each statement can be properly analyzed.

The Shopkeeper is The Bowman (or Western Hero from Ninja's perspective)

Within the game itself, there are a couple of red herrings that suggest The Shopkeeper is potentially The Bowman:

However, this was the completely wrong statement, implying that The Shopkeeper isn't The Bowman.

From Ninja's perspective, The Shopkeeper is usually in the shop, and he has stories to share

The Shopkeeper is indeed usually in the shop and has stories to share, from Ninja's perspective. Many voters believed this was the completely true statement. However, it was actually the statement that contained an important mistake, since it refers to The Shopkeeper as "he."

The Shopkeeper is the first of the Blue Robes Order, and also the first Messenger

In-game, The Prophet states that The Shopkeeper is the first of the Blue Robes Order. However, it was never mentioned that The Shopkeeper was also the first Messenger. This lack of knowledge made many voters believe that this was important mistake. But surprisingly, as revealed by The Archivist, it was a completely true statement.

On March 26, 2019, the official Shopkeeper pin was released on Fangamer. The description for the pin refers to The Shopkeeper as "he," hiding the reveal.

"Whether you need valuable items or critical exposition, he can help. Even if he doesn't look much like a shopkeeper."

On January 27, 2020, a special several-day event was held in which the three Voidwalkers were given a chance to procure information from The Void. They were locked within #the-void text channel, but they left on January 30 and 31 as The Void began to close. The Archivist gave each of the three Voidwalkers the opportunity to ask him a single question before leaving. Voidwalker Stéphanie followed the community's wishes to ask a question about The Shopkeeper's identity. 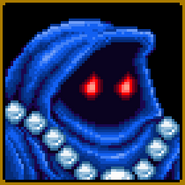 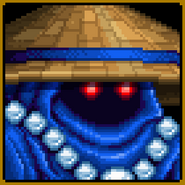 The Shopkeeper's 16-bit talk portrait icon, with a hat. 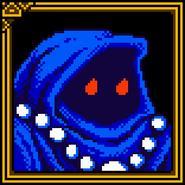 The Shopkeeper's 8-bit portrait that appears while buying upgrades. 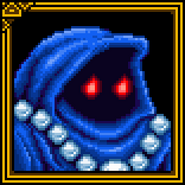 The Shopkeeper's 16-bit portrait that appears while buying upgrades. 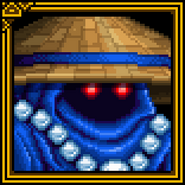 The Shopkeeper's 16-bit portrait with a hat that appears while buying upgrades.

The Shopkeeper's 8-bit windy spritesheet when she's waiting at the top of Glacial Peak and before the Arcane Golem boss fight.

The Shopkeeper's sprite for the ending.

The Shopkeeper's 16-bit idle spritesheet, with a hat.

The Shopkeeper's spritesheet for taking out her scrying orb. 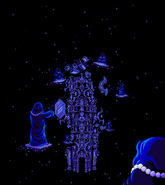 The Music Box cutscene, where The Shopkeeper watches over the construction of the Tower of Time. 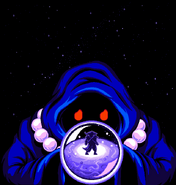 The Music Box cutscene, where The Shopkeeper gazes at Ninja inside of a scrying orb. 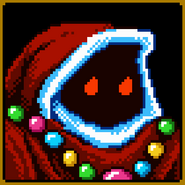 The Shopkeeper's "PresentkeeperPortrait," promotional artwork of The Shopkeeper used on social media during the winter.

The Holiday Shop posted on social media during the winter to celebrate the holidays. It depicts The Shopkeeper in her "Presentkeeper" outfit.

"Fine, I Won't Open It" achievement, which depicts The Shopkeeper's face. 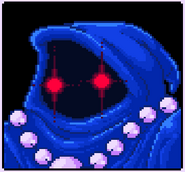 Beta version of The Shop.

The Shop from the Gamescom 2017 teaser trailer. 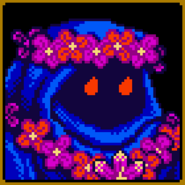 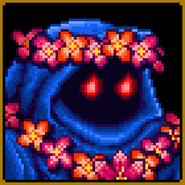 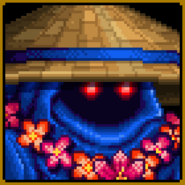 The Tikeeper's 16-bit talk portrait icon, with a hat. 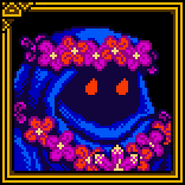 The Tikeeper's 8-bit talk portrait that appears while buying upgrades. 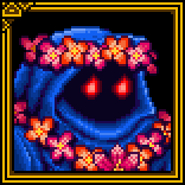 The Tikeeper's 16-bit talk portrait that appears while buying upgrades.

The Tikeeper from the Picnic Panic key art.

The Tikeeper's 16-bit spritesheet, with a hat.

Sprite of The Tikeeper raising an arm into the air.

The Picnic Panic version of the 8-bit shop.

The Picnic Panic version of the 16-bit shop.

Picnic Panic key art #1, which depicts The Shopkeeper in her "Tikeeper" outfit.

The Shopkeeper holding an E3 trophy, from this tweet.

Official T-shirt design for PAX East 2018, which depicts The Shopkeeper in the center. 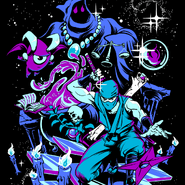 Fangamer T-shirt design, which depicts The Shopkeeper in The Shop. 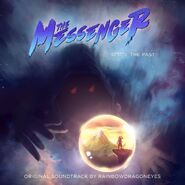 Artwork for disc 1 of the OST. 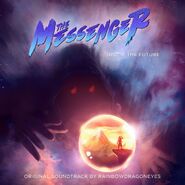 Artwork for disc 2 of the OST. 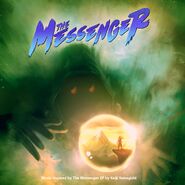 Artwork for the EP music tracks.

Larger version of the OST artwork, which depicts The Shopkeeper gazing at Ninja within a scrying orb. 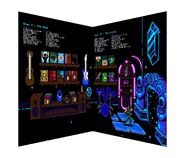 The Shopkeeper in a vinyl disc-themed shop in the official OST vinyl song list artwork.

The Shopkeeper in Shinobi No Kikan.