Tall and speaking in riddles, The Prophet is part of the same order as The Shopkeeper.

"*ahem* THE MISTS OF TIME ARE QUITE INTRICATE INDEED, BUT FEAR NOT, FOR THE PROPHET IS HERE TO UNRAVEL THEIR MEANING" ― The Prophet

The Prophet is a character in The Messenger. He is a member of the Order of the Blue Robes, and he recites pertinent sections of the prophecy to Ninja to help him locate the Music Notes.

Like the other members of the Blue Robes, The Prophet wears a blue robe outfit and a necklace of round white beads; the outfit shrouds his face in darkness except for two glowing red eyes. He is tall in height.

The Prophet enjoys speaking dramatically. He is bothered when the other Blue Robes members interrupt his attempts at roleplaying.

Ninja arrives at the top of Glacial Peak, where he encounters The Prophet, The Artificer, and The Shopkeeper. The Prophet requests Ninja to hold the scroll aloft, and Ninja complies, which results in summoning the Tower of Time. The Blue Robes enter the Tower one-by-one, and before taking his leave, The Prophet explains that a gauntlet awaits Ninja and that the Blue Robes will be waiting at the top of the Tower.

Ninja arrives in the next room of the Tower of Time, encountering the Blue Robes waiting for him next to a large pit. The Prophet explains that Ninja must pass the "Test of Faith" by taking the leap, but this only confuses Ninja. The Shopkeeper bluntly spells out that Ninja needs to jump into the pit, which bothers The Prophet as he was attempting to build the mood. Ninja jumps in, sending him 500 years into the future.

After Soldier dies, The Shopkeeper panics and then discusses the next course of action with the other Blue Robes members. The Blue Robes come to an agreement that Ninja must take up the role of Messenger once again. When Ninja arrives in the Tower of Time HQ, he overhears a discussion between The Prophet and The Shopkeeper. The Shopkeeper believes that Ninja has been carrying the scroll for too long of a period of time already, which could be dangerous. However, The Prophet believes that Ninja is the one foretold in the visions, a born-again Messenger who masters time itself to end the curse by fighting in two cycles simultaneously. The Shopkeeper is doubtful, but The Prophet retorts that, unless The Shopkeeper wants to carry the scroll again, they have little choice in the matter. The Prophet emphasizes that they should prioritize fulfilling the prophecy by collecting the remaining Music Notes.

As Ninja explores the world in search for Music Notes, The Prophet acts as Ninja's guide, providing cryptic clues that hint where he needs to go next. Ninja can choose to purchase hints from The Shopkeeper to decipher the prophecy, adding markers to his map. Ninja eventually collects the six remaining Music Notes and inserts them into the wall above the Music Box, completing the melody. Ninja asks for advice on what to do next, but The Prophet responds that he has no idea what happens next, as the prophecy ends with the gathering of all the Music Notes. He teleports away and returns with The Shopkeeper, who fills in Ninja on the origins of the curse. Afterwards, The Prophet prompts Ninja to enter the Music Box in order to rescue Phantom.

At the top of the Tower of Time, The Prophet, The Artificer, and Monk await for Ninja, Phantom, and The Shopkeeper to safely return from inside the Music Box. The Prophet worries that The Shopkeeper might not reach Ninja and Phantom in time in order to rescue them. However, Ninja, Phantom, and The Shopkeeper arrive safely on scene, and all seems well. The reunion is interrupted by the arrival of the Mask, which causes the group to worry. Although The Shopkeeper and The Prophet are skeptical that they have any chance of stopping the Mask now that its full power has been unleashed, The Artificer reminds the group that they are all attuned to the scroll, meaning that the group can "do the thing" in order to form the Arcane Golem. The group teleports away and returns, transformed into the Arcane Golem. The Arcane Golem and the Mask engage in a laser beam duel, and the Arcane Golem ekes out a victory, shattering the Mask into many pieces.

Just as Ninja is about to leave on his journey to Voodkin Island, The Artificer walks into the shop, detecting that a portal just opened. The Shopkeeper reassures The Artificer that there's no need to worry and that he'll be kept in the loop, but The Artificer stays put and complains that no one really pays attention to him compared to The Shopkeeper or The Prophet. The Prophet, upon hearing his name, teleports into the shop. The two talk with each other for a bit and remain completely preoccupied as Ninja takes his leave.

On the day of the grand opening of #the-shop text channel in the official The Messenger Discord, The Shopkeeper dropped some gossip about The Prophet. 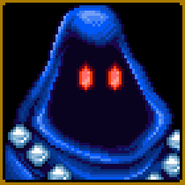 The Prophet's 8-bit talk portrait inside of the map.

The Prophet's 16-bit talk portrait inside of the map.

The Prophet's 8-bit sprite for the ending. 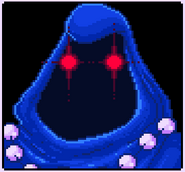