"Haha! You didn't think The Shopkeeper was the one who made the Climbing Claws, now, did you?" ― The Iron Hood

The Iron Hood is a character in The Messenger. He is a member of the Order of the Blue Robes who hid away inside the shop's Money Sink. The Iron Hood is a legendary craftsman who made Ninja's Climbing Claws, Wingsuit, and Rope Dart. He makes toys that Ninja can purchase with Time Shards

in The Craftsman's Corner.

Like the other members of the Blue Robes, The Iron Hood wears a blue robe outfit and a necklace of round white beads; the outfit shrouds his face in darkness except for two glowing red eyes. He is a large man with huge arms. The counter he stands behind hides the fact that he wears blue sandals.

As depicted in his Tower of Time statue, The Iron Hood is extremely buff, with muscly arms, muscly legs, abs, and broad shoulders. He wears a hood that obscures his face, arm guards that cover his wrists, a loincloth, and boots. He wears no other clothing, so his arms, hands, legs, and torso are exposed.

The Iron Hood thoroughly enjoys his toy-crafting hobby. He tends to laugh while talking.

As Ninja traverses through the Tower of Time, he encounters various large statues with plaques in a mysterious writing. The fourth statue Ninja passes depicts The Iron Hood, which is labeled with a plaque that translates to "THE IRON HOOD." In final room of the Tower Time before Cloud Ruins, Ninja encounters this statue again, along with a couple of other statues he passed earlier.

If Ninja purchases all of the shop upgrades, a Money Sink appears in the shop. During the Version 1.0.4 build of the game, players could waste any amount of Time Shards they wanted into the Money Sink.[1] However, with the release of the Picnic Panic DLC, the Money Sink becomes clogged. After interacting with the clogged sink, The Shopkeeper suggests locating a "Money Wrench."

Ninja asks The Iron Hood who he is, mentioning that he thought that there were only three Blue Robes members. The Iron Hood is surprised that there are only three members left in the Order and comments that hiding away was a good decision. He introduces himself as Iron Hood, Entrepreneur Extraordinaire, and informs that Ninja is fully equipped with his creations, such as the Climbing Claws. The Iron Hood also explains that he has since changed his vocation to toy making and that he sells toys. As Ninja buys toys from The Iron Hood, the shelves in the background of The Craftsman's Corner are filled with miniatures of various enemies and bosses.

Outside of the game, players from the official The Messenger Discord sever were given a chance by The Archivist to choose between three different books, labeled "NINJA," "THE ALCHEMIST," and "BARMA'THAZEL." Players voted for the book labeled "NINJA," which did not actually provide any new information about Ninja. However, it did reveal new lore about The Iron Hood himself.

When translated, the passage reveals that Ninja's Wingsuit was crafted by The Iron Hood and that The Iron Hood is a legendary craftsman.

In the official The Messenger Discord server, the Clockwork Concierge mentioned that he gave instructions to The Iron Hood related to the shop's Money Sink.

The Shopkeeper visited Kammesennin's Twitch stream and dropped a rumor about The Iron Hood.

TwoCPlus ran a speedrun of The Messenger for a Games Done Quick Community Spotlight, which was streamed on Twitch. After TwoCPlus passed by the Tower of Time statue of The Iron Hood, the actual Shopkeeper noted that it was the same person as the one from the Money Sink.

"John Gaiden" was revealed to be The Iron Hood's full name, in a quiz held by the Clockwork Concierge. 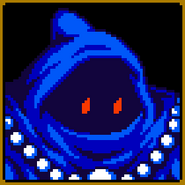 The Iron Hood statue makes a second appearance in the Tower of Time.