The Fleshmancer, also known as Aephorul, is a character mentioned in the ARG in the official The Messenger Discord. He is the ultimate villain that The Archivist is trying to deal with.

A couple of days before the release of Picnic Panic, the Clockwork Concierge explained that he had received a scroll from The Archivist. The Concierge had Kammesennin deliver the message to the Discord. The document was written in mystic runes, and in the first paragraph of the message is the first ever mention of "The Fleshmancer." 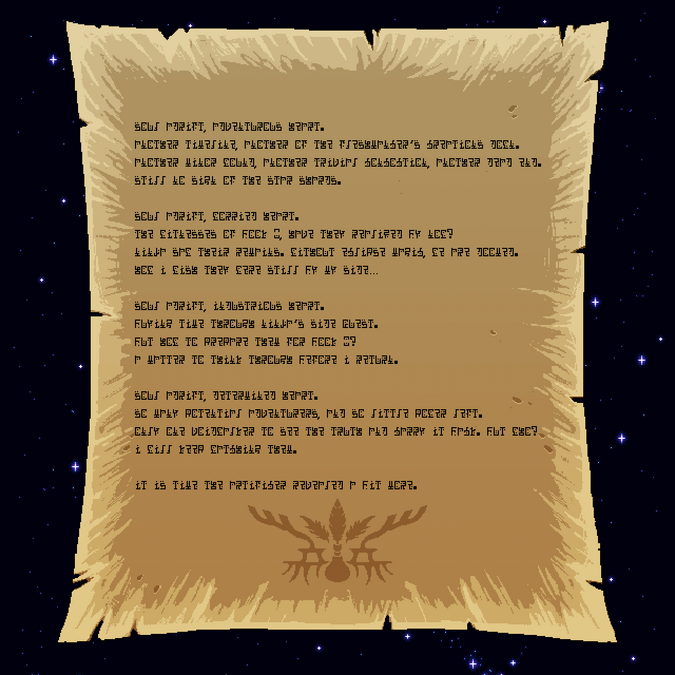 "SOUL ADRIFT, ADVENTUROUS HEART.
ANOTHER TIMELINE, ANOTHER OF THE FLESHMANCER'S CREATIONS DOWN.
ANOTHER MINOR WOUND, ANOTHER TRIVIAL CONCOCTION, ANOTHER DEAD END.
STILL NO SIGN OF THE STAR SHARDS.

"SOUL ADRIFT, WORRIED HEART.
THE WITNESSES OF BOOK 1, HAVE THEY REALIZED BY NOW?
NINJA SAW THEIR REMAINS. WITHOUT ECLIPSE MAGIC, WE ARE DOOMED.
HOW I WISH THEY WERE STILL BY MY SIDE...

"SOUL ADRIFT, INDUSTRIOUS HEART.
BUYING TIME THROUGH NINJA'S SIDE QUEST.
BUT HOW TO PREPARE THEM FOR BOOK 2?
A MATTER TO THINK THROUGH BEFORE I RETURN.

"SOUL ADRIFT, DETERMINED HEART.
SO MANY POTENTIAL ADVENTURERS, AND SO LITTLE POWER LEFT.
ONLY ONE VOIDWALKER TO SEE THE TRUTH AND CARRY IT BACK. BUT WHO?
I WILL KEEP WATCHING THEM.

"IT IS TIME THE ARTIFICER REVEALED A BIT MORE."

Later that day, in reference to the last line of the message, The Artificer made a blog post on the official website.

In Chapter 2 of the text adventure game in #the-shop text channel, The Fleshmancer was mentioned a couple of times as a character in the story.

The Clockwork Concierge talked very briefly about his past, mentioning "the kids" in relation to "The Fleshmancer."

The Clockwork Concierge revealed that The Fleshmancer destroyed the moon in one of the timelines. This message was promptly deleted by SaboTeam, due to an NDA with The Archivist that prohibits the reveal of unreleased lore content.[1]

Thierry Boulanger, the main director and writer of The Messenger, responded to a question about Ruxxtin's reasoning for raising an army of the dead.[2] He revealed a small lore tidbit about The Fleshmancer.

In the official The Messenger Discord server, during a visit from The Shopkeeper in #the-shop text channel, "Ramblings of a lost soul Chapter 2" became an available shop upgrade in the Discord branch of The Shop. After it was purchased, Manfred delivered a scroll and gave it to The Shopkeeper, who then handed the scroll to the community. The document contains the first mention of someone named "Aephorul" (who would later be confirmed to be The Fleshmancer).

"SOUL ADRIFT, RESIGNED HEART
CLOSING ANOTHER TIMELINE THAT COULD HAVE BEEN
HOW MUCH IS ENOUGH, AEPHORUL?

"SOUL ADRIFT, FORLORN HEART
LUANA, I NEED YOUR STRENGTH TO CARRY ME
SOLEN, I NEED YOUR LIGHT TO GUIDE MY PATH

"SOUL ADRIFT, HOPEFUL HEART
ALL THESE MESSENGERS, ARE THEY READY?
PERHAPS IF I SHOWED THEM THE PAST...

"STARS ALIGN AT THE TURN OF SPRING,
A VOIDWALKER IS NEEDED BEFORE THEN."

In the official The Messenger Discord server, The Archivist gave the Clockwork Concierge another scroll to deliver to the community. The document contains reference to The Fleshmancer / Aephorul.

"AND ON THE SPRING EQUINOX
THERE ARE THOSE WHO WILL KNOW

After the scroll was successfully translated, the Concierge awarded the community 1,000 Time Shards.

In Chapter 3 of the text adventure game in #the-shop text channel, The Fleshmancer's name was confirmed to be "Aephorul."

Community content is available under CC-BY-SA unless otherwise noted.
Advertisement