"As you look like the most capable around here, I have a task of the utmost importance for you. Take this scroll, and carry it across the island." ― The Bowman

The Bowman, also known as The Western Hero, is a character in The Messenger. He wields a bow and rescues Ninja Village from the demon army in the beginning of the story.

The Bowman wears yellow traditional East Asian armor. He has a short brown cone-shaped hat with yellow ear flaps, a yellow mouth balaclava, brown shoulder pads, brown gloves, and brown and yellow mountain boots, all trimmed with beige fur. He has brown pants. On his back is a brown quiver filled with arrows with orange fletchings. He wields a simple yellow bow with a beige string.

The Bowman does not have many lines of dialogue interaction, but from the few lines provided, he seems very straightforward and wise.

In the middle of the Demon King's assault on Ninja Village, The Bowman appears from the west, riding on an orange phoenix. He jumps off of the phoenix and shoots a barrage of glowing magic blue arrows at the demon army, which kills two Ranged Kappa and pushes back the Demon King. The demons leave, and Ninja approaches The Bowman, inquiring if The Bowman is the Western Hero of legend. The Bowman confirms he is indeed the Western Hero and tasks Ninja with the role of The Messenger. He hands the scroll to Ninja and directs him to climb to the top of Glacial Peak, where three sages would be waiting for him. The Bowman bids him good luck and teleports away in a flash of blue light.

A statue of The Bowman can be seen in the Tower of Time, above the first shop. The statue's plaque translates to "THE BOWMAN." 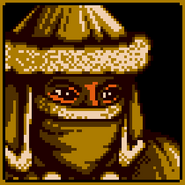 The Bowman's talk portrait icon without the scroll. 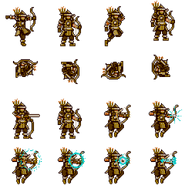 Color-corrected spritesheet of The Bowman.

Color-corrected spritesheet of The Bowman's arrows.

Color-corrected spritesheet of The Bowman teleporting.

Color-corrected spritesheet of The Bowman riding his phoenix.

The Tower of Time statue, "THE BOWMAN." 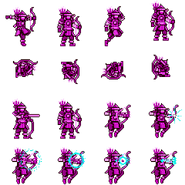 The Bowman and phoenix's spritesheet.

Intro cutscene depicting The Bowman arriving from the west on a phoenix.

Intro cutscene depicting The Bowman instructing Ninja to deliver the scroll to the top of Glacial Peak.

The Bowman riding a phoenix towards Ninja Village.

The Bowman statue in the Tower of Time, just above The Shop.

The beta version of the intro cutscene, depicting a character with a sword arriving from the west on a phoenix.

Official T-shirt design for PAX East 2018, which depicts The Bowman on the left.