Small and always over-excited, The Artificer is part of the same order as The Shopkeeper.

"Welcome to the Tower of Time! I put it back into its headquarters form after you beat the challenge. Which I had designed myself, by the way!!!" ― The Artificer

Like the other members of the Blue Robes, The Artificer wears a blue robe outfit and a necklace of round white beads; the outfit shrouds his face in darkness except for two glowing red eyes. He's short in height and a bit plump in appearance.

The Artificer has a one-track mind, mostly concerned about doing his favorite activity, which is "the thing." He's quite proud of himself for designing the Tower of Time challenge and is always willing to let Ninja repeat the challenge. The Artificer is so proud of his work that he wants Phantom to try out his challenge as well. He is very excitable, but he has trouble reading the situation or just plain up decides to ignore the others when the other members of the Blue Robes tell him to calm down.

The Artificer has a positive outlook on things, such as encouraging the others even when things seem grim with the Mask's return.

Ninja reaches the top of the Tower of Time where he encounters the Blue Robes, and again, The Artificer expresses his desire to "do the thing." The Prophet begins a speech, but The Artificer gets impatient and rushes to teleport away first. The Prophet is not pleased, but The Shopkeeper and The Prophet teleport away as well. The Blue Robes return in the form of the Arcane Golem. Ninja and the Arcane Golem engage in battle, and Ninja eventually wins.

In the next room of the Tower of Time, the Blue Robes trio awaits for Ninja. The Artificer senses Ninja is on his way, and The Prophet instructs The Artificer to let him do his job this time. Ninja arrives, and The Artificer complies with The Prophet's wishes and stands there silently during the "Test of Faith" segment.

If Ninja investigates the scary-looking portal in The Artificer's room, The Artificer explains that, after years of research, he learned that one of the items that needs to be recovered is in the very future the Blue Robes are trying to prevent (the Corrupted Future); the portal leads there, but the portal needs to be powered by a relic imbued with demon magic (the Demon Crown).

Ninja obtains the Demon Crown by defeating the Demon King and places the crown inside of the machine linked to the scary portal. This powers the portal, allowing Ninja access to the Corrupted Future. Ninja obtains the Key of Courage from the Corrupted Future and returns back to The Artificer's room. The Artificer is surprised but delighted that Ninja made it back safely and asks what he found. Ninja replies that he encountered an abomination beyond words. The Artificer finds this info totally amazing and asks if Ninja encountered anything else. Ninja replies that he found one of the Music Notes. The Artificer is happy to hear this because it means that The Artificer's calculations were true and that he won a bet against The Shopkeeper, meaning The Shopkeeper has to do the dishes for a week. The Artificer thanks Ninja. Afterwards, if Ninja investigates the scary portal again, The Artificer mentions that the portal no longer works since it's been destroyed from the other side. However, The Artificer does not mind, since the Blue Robes obtained what they needed.

As Ninja is about to leave for the Picnic Panic timeline via a portal in the shop, he is interrupted as The Artificer casually walks in. The Artificer is concerned, stating that his devices detected a portal opening and that it is his job to open portals. The Shopkeeper reassures The Artificer not to worry, explaining that Ninja is merely leaving for a side-adventure. The Artificer requests to be kept in the loop if they happen to "do the thing" during the adventure, since he is eager to participate. Despite The Shopkeeper's reassurances, The Artificer remains put and expresses his disappointment that nobody really pays attention to him compared to The Shopkeeper or The Prophet. The Prophet, upon hearing his name, teleports into the shop, sidetracking events even further. As The Artificer and The Prophet get caught up in a conversation, Ninja quietly takes his leave through the portal and into the Picnic Panic timeline.

Ninja reaches the Voodoo Heart, where Barma'thazël's evil plans come to fruition. Barma'thazël and the Dark Messenger "do the thing" and form their own unique take of the Arcane Golem. The Artificer teleports on scene, learning that his "do the thing" prediction came true. He realizes that the situation is grim and returns back with The Shopkeeper. The Artificer, The Shopkeeper, and Ninja each raise an arm into the air and teleport away, returning in the form of the Arcane Golem. The Arcane Golem and the transformed Barma'thazël duke it out in a boxing match, and the Arcane Golem eventually emerges as the victor. Barma'thazël is defeated, but he takes the opportunity to absorb the Dark Messenger's voodoo energy into a magic seed before teleporting away to escape. The Phobekins that were held hostage by Barma'thazël are freed, and The Artificer partakes in the celebratory picnic, much to his delight. 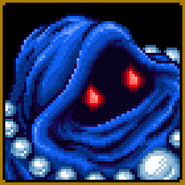 8-bit sprite of The Artificer holding his arm up.

16-bit sprite of The Artificer holding his arm up. 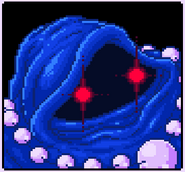 Official T-shirt design for PAX East 2018, which depicts The Artificer with a happy expression.