The Archivist is a mysterious being at the center of an ARG in the official The Messenger Discord. He was once known as The Alchemist, and his real name is Resh'an. The Archivist catalogs events from the universe of The Messenger into books, and he sends them to Sabotage Studio so they can translate the books into video games.

The ultimate villain The Archivist is trying to deal with is The Fleshmancer.

The Steam version of the Version 1.0.4 update released on November 20, 2018. On that day, The Shopkeeper chatted in Soleil's Twitch stream of The Messenger. The Shopkeeper revealed the existence of an unknown character named "The Archivist."

In the PC version of The Messenger, the dialogue files are easily accessed from a folder called "StreamingAssets."

Before the Version 1.0.4 update, there were only 3 dialogue files.

However, the "LocDialog_Plus.tsv" file has a secret message, hidden hundreds of empty lines below the normal game dialogue. This message does not ever appear within the game itself and is only found within the game files. 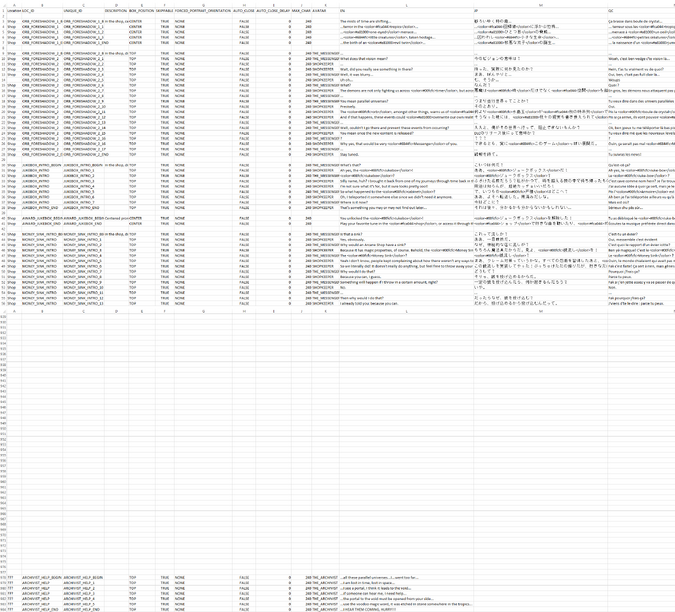 When The Archivist's secret dialogue in the dialogue files was discovered by Soleil, a new text channel in the official The Messenger Discord appeared, called #the-void. This text channel acted mysteriously, popping in and out of existence and sometimes floating up and down the list of channels. Pictures could not be uploaded to this channel, unlike with the other text channels.

When members posted a few comments into #the-void, #the-void would disable the ability to post further comments. It would disappear and return at random times, with any previous messages completely erased. This repeated several times until eventually, no one could comment in #the-void, except for Soleil, who was silently granted a Discord role called "Loremaster." This role was required to be allowed to comment in #the-void.

#the-void text channel continued to act mysteriously. It would frequently pop in and out of existence, occasionally floating up and down the list of channels, and if commented in even once, would force-disable any further comments until its next reappearance. Whenever it reappeared, any previous messages posted within it were completely erased.

The first Picnic Panic DLC trailer was released on December 8, 2018. The trailer showcases Ninja's adventures in the tropics. And at the 0:22 mark of the trailer, a splash text image titled "VOODOO MAGIC" appears in large stylized letters, corresponding to The Archivist's message, "...use the voodoo magic word, it was etched in stone somewhere in the tropics..." After the words "VOODOO MAGIC" appear in the trailer, Ninja jumps through a circular time rift, transforming the world from 8-bit to 16-bit. He runs forward, passing by a stone slab in the background. This stone slab has runes etched into it, using the in-game alphabet. When translated, the stone slab reads "TUWHERA."

When #the-void reappeared, the word "TUWHERA" was posted into it. A new member named "TheArchivist" joined the Discord, a person with the "Loremaster" role.

The "Loremaster" role was removed from Soleil, as the role was transferred back to The Archivist.

Note: Before the Picnic Panic DLC update, the Money Sink's only use was wasting Time Shards (see video).

An overwhelming number of VoteO

votes overtook the poll before proper discussions about the vote could take place. Some discussions took place about the preference of VoteX

by some of the more active members, but the poll was already extremely lopsided towards VoteO

and looked like there was no chance for the other poll options. Multiple members expressed disappointment about the lack of proper discussion. This caused The Archivist to message Thierry to restrict access to #the-void, making #the-void only viewable to members with the "Ninja" Discord role.

However, The Archivist kept messaging Thierry even after this change was made. The Archivist made another request, to reset the vote in #the-void.

But a few minutes later, The Archivist expressed his anger.

The Archivist deleted his original poll, replacing it with a new, unfavorable poll.

During this stretch of time, the votes fluctuated many times, in an attempt to keep balance. When the balance was tipped, many members cooperated together, offering to remove their vote or to add their vote to the appropriate poll option. Members coordinated together to figure out the best way to keep the poll in balance while also getting as many people as possible to participate in the vote so that they could all share the vanity role, "Voidmender."

As discussions took place in the #ninjas text channel, one member, Kammesennin, offered to give up his vote if it came down to the wire.

Kammesennin received a private message from The Archivist.

As time drew closer to the deadline, The Archivist began a countdown, and the voting became more frantic.

At 5:45 PM, #the-void channel completely disappeared. Time passed with unease, as votes had changed during the last few moments, and it was unclear if someone had tipped the balance at the last second. But a few minutes later, members noticed that those who participated in the vote had a new vanity role, "Voidmender," which shared the same green color as The Archivist's "Loremaster" role. Those who participated but sacrificed their vote in order to keep the vote in balance, did not receive the vanity role, "Voidmender."

About half an hour later, #the-void came back. All messages posted in #the-void during January 23, 2019, were completely removed and replaced with the following message.

Some time later that day, The Archivist was kind enough to award those who participated but sacrificed their vote the "Voidmender" role anyways. From that day forward, #the-void would remain only visible to members with the "Ninja" role.

The next day on January 24, 2019, the reasoning for The Archivist's anger the previous day was described more clearly by Thierry in the #ninjas text channel.

were briefly tied. The Archivist posted this message.

eked out a victory by 1 vote. The Archivist deleted his message and replaced it with the following message.

One special day, The Archivist hopped out of #the-void text channel to deliver a very important react into the #ninjas text channel.

Note: Some messages were omitted for readability.

The Clockwork Concierge eventually took over The Archivist's role for ARG-related activities. After 500 members joined the official Discord server, Clockwork Concierge was successfully recruited to the server, where he serves as a bot and a moderator. He (mostly) uses dialogue boxes as a form of communication rather than just plain text.

The Clockwork Concierge dropped a hint that The Archivist told the Concierge to guard an evil object inside of the Clockwork Castle. The Concierge then posted a message with important names censored, which was deleted by SaboTeam.

Paraphrasing of the deleted message:

Later that day, Clockwork Concierge wrote messages related to the Demon King that were swiftly deleted by SaboTeam.

To celebrate Sabotage Studio's birthday, the Clockwork Concierge held a trivia quiz with 2,000 Time Shards as the prize. The Archivist was mentioned again, and Clockwork Castle's connection to the Demon King remnants was confirmed.

The Clockwork Concierge delivered a message from The Archivist.

Clockwork Concierge revealed more information about himself and explained that he works for The Archivist.

The Archivist delivered a letter to the Clockwork Concierge, and the Concierge spoke with Manfred about it.

The Clockwork Concierge held a meeting with Kammesennin to discuss The Archivist's letter.

The Clockwork Concierge announced that the 5th opening of the shop would occur September 13, and that there would be news from The Archivist.

Ashes was selected to be "The Messenger" for the 5th opening of #the-shop text channel, and The Shopkeeper gave "The Jukebox" as a free upgrade. Unlocking "The Jukebox" resulted in an upgrade called "Ramblings of a lost soul Chapter 2" to appear in the shop's talent tree.

Over the course of the ARG, various letters of the alphabet were collected by the community (detailed here). Ashes asked what the purpose of collecting the letters was. The Shopkeeper explained that collecting and then unscrambling all of the letters was necessary in order to summon The Archivist once again, and that the mystery word would not be "TUWHERA." While The Shopkeeper chatted with Ashes, it was revealed that The Archivist's main villain is not the Demon King. They purchased "Ramblings of a lost soul Chapter 2," the second scroll from The Archivist.

The Clockwork Concierge gave Kammesennin another scroll to deliver to the community, "Archivist_Scroll_3.png." This initial document contained a typo, so a new scroll named "Actual_Archivist-Scroll_3.png" was delivered shortly afterwards.

In Chapter 3 of the text adventure game in #the-shop text channel, The Archivist's real name was confirmed to be "Resh'an," and he gave the protagonist a glimpse at the first chapter's title of Book 2.

Português do Brasil
Community content is available under CC-BY-SA unless otherwise noted.
Advertisement