Soldier is a character in The Messenger. After Ninja rescues future Ninja Village as the Western Hero, he passes on the scroll to Soldier, who becomes the next Messenger. However, Soldier does not keep his role for very long since, after his death, nobody sends Quarble within time to rescue him.

Soldier's personality is strikingly similar to Ninja's. Like Ninja, he is eager to leave his home and explore the world. Soldier views the world with childlike wonder, like being amazed at Ninja's arrival as the Western Hero, being excited for receiving his first free upgrade for his journey, and jumping around the shop for no particular reason. Similar to Ninja, he takes to new information slowly, being generally confused about the Messenger role explanation, and being confused about the "Ray Troid" joke.

After defeating Barma'thazël, Ninja rides Manfred eastward, leaving the Underworld and flying towards future Ninja Village. The skies of the village are colored red, and damaged futuristic gray buildings and collapsed soldier bodies are seen dispersed around. Soldier, the last man standing, faces the Demon King and a couple of Ranged Kappa, paralleling the game's beginning scene of the first demon attack. The Demon King taunts Soldier, telling him the prophecy of the Western Hero won't be fulfilled and that he will die. However, Ninja arrives from the west, flying on Manfred. Ninja takes a leap into the air and throws a barrage of glowing magic blue shurikens at the demon army, which kills the two Ranged Kappa and pushes back the Demon King.

The Demon King is angered by Ninja's interference and states that Barma'thazël failed his job. Ninja declares that the Demon's King reign is finally over, but the Demon King laughs, explaining that the curse upon humanity is never-ending. The Demon King goes on to say that his minions will make short work of Soldier, then teleports away.

Soldier approaches Ninja and praises him, asking him if he's the Western Hero. Ninja is about to decline the title, when he realizes that he made a round-trip around the world and returned back to his hometown, but a future version of it. Ninja does his best to act out the role of the Western Hero. He holds out the scroll to Soldier and instructs him to deliver it to the top of the world's highest mountain. Soldier is surprised but expresses his desire to leave the outpost. Ninja attempts to explain to Soldier that a Messenger is needed and bids him a "godspeed," but this only confuses him. Ninja bluntly tells Soldier to just take the scroll, so Soldier obliges and takes the scroll then leaves the village. Ninja teleports away in a flash of blue light.

Soldier eventually reaches his first shop, where Ninja in a blue robes outfit mans the counter. Ninja greets Soldier in a manner similar to The Shopkeeper's greeting to Ninja in the beginning of the game but with a few twists. Ninja gives Soldier a free beam charger upgrade, to Soldier's delight. Soldier then leaves the shop but shortly returns. He jumps around a couple of times before talking to Ninja, thanking Ninja for the free upgrade and saying it felt like a natural enhancement based on Soldier's environmental layout. Ninja responds that's the reason why "Ray Troid" invented the beam charger decades ago. Soldier asks who "Ray Troid" is, but Ninja's only explanation is that it's a follow-up to an earlier joke. Soldier doesn't understand, but Ninja replies that some will understand the joke.

After some amount of time passes, The Shopkeeper checks in on Ninja's situation since Soldier has not visited for a while. She explains that the Tower of Time should automatically take Ninja forward to the next important moment, which would be either Soldier enters the shop, or Soldier doesn't enter the shop because he's dead. The Shopkeeper goes on to say that Quarble must be sent within 10 seconds of a Messenger's death, or the Messenger is dead for good. She peers into the shop's scrying orb to check in on Soldier's status, then freaks out, implying that Soldier died.

The Shopkeeper fetches Soldier's scroll and then temporarily visits the Tower of Time HQ order to chat with the other Blue Robes members about the next course of action. They come to the agreement that Ninja must finish the job. The Shopkeeper places the scroll with Ninja's belongings in the cabinet, and Ninja takes up the role of The Messenger once again. 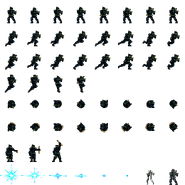 A fallen soldier from Soldier's village.

The Demon King refers to Soldier by name.
Русский
Community content is available under CC-BY-SA unless otherwise noted.
Advertisement