To the Top (Searing Crags)

Searing Crags is the eighth area of The Messenger. It is a red mountain at the base of Glacial Peak.

The west side of Searing Crags is accessed from Quillshroom Marsh, and the north side leads to Glacial Peak. In 16-bit, a southeastern pathway to the Underworld opens up and can be crossed with the Lightfoot Tabi.

Searing Crags is composed of rocky red-orange terrain. Green cacti, white animal skulls, green tents, brown crates, and leaf-free brown trees are interspersed throughout the area. The background sky has a sun in the lower-left corner of the screen, creating an orange horizon in a red sky. A few stars dot the red portion of the sky closest to the orange horizon. And in the distance are huge pointed and jagged dark rocks.

In a room with a breakable block directly next to a checkpoint, break the block and head past the checkpoint into the next room. There are two spike-lined crusher blocks with a lantern under each of them, separated by a death gap and rocks falling from the ceiling. Wait for the spike-lined crusher blocks to lift up, and Rope Dart the lanterns to reach the opposite side of the room. Slash at the falling rocks while crossing the gap in order to destroy them and to prevent taking damage. Climb up into the Power Seal room.

In 16-bit, in a room with a swinging spikeball, climb into the upper-left corner to reach a checkpoint. Head left into the Power Seal room. Cloudstep the lanterns while avoiding midair rotating circles of spikeball plants to reach the Power Seal.

In 16-bit, in the tall vertical room before Colos and Suses's boss room, there is a breakable block on the left wall. Break the block and head left into the next room. Cloudstep off of the falling rock projectiles to cross the death gap. Climb up into the Power Seal room. 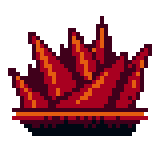