Rivière Turquoise is an area in The Messenger. It is a sacred grove that became charred after being taken over by demons. The grove became lush again after a powerful Messenger drove the out demons and brought in the Butterfly Matriarch. Many Magic Fireflies are scattered around this area.

Rivière Turquoise is filled with black charred trees with curly branches. Each tree is covered in bits of glowing blue fire, and many of the trees have a single spooky face on their trunk. The grass is similarly charred black. The waterfalls and rivers are green. In the distant background are both short and towering charred trees.

Rivière Turquoise is filled with lush green trees and green grass. Light blue crystals and pink flowers are interspersed throughout the area. Blue particles of light fly upward from the bottom of the screen. The waterfalls and rivers are light blue. The distant background is tinted pink-purple and has both short and towering trees. Blue cannon plants and blue bouncy flowers are used to navigate certain sections of Rivière Turquoise.

On the right wall below the Rivière Turquoise world portal is a breakable block. Break the block and enter the Power Seal room. Avoid the electric balls while Cloudstepping the lanterns to reach the Power Seal.

After a shop checkpoint preceded by three stationary Magic Fireflies, head left into the next room and through a time rift. Fall down the screen while aligned with the left waterfall; continuing to fall off-screen will lead into a room that has a blue cannon plant. Enter the blue cannon plant to launch Ninja up two screens and into the Power Seal room. Rope Dart the metal ring and the lantern to reach the Power Seal.

In a room with four Blue Kappa and a swinging platform, take the circular time rift to switch from 8-bit to 16-bit. Break the breakable block on the left side of the screen. Navigate a series of rooms with blue cannon plants and blue bouncy flowers to reach the Power Seal. 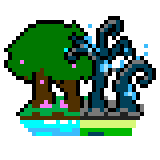