"I was exiled a long time ago. When I got cursed along with my Messenger..." ― Quillble

Quillble is a character in The Messenger. She is a greed demon who follows around the Queen of Quills. When Monk defeated the Primal Fear, the monster cursed both Monk and Quillble with the "Curse of Quills," which resulted in Quillble's exile from greed demon society.

While she is cursed, Quillble is a tiny flying green demon covered in quills. Like Quarble, Quillble has curly beige ram horns at the top of her head, short arms with beige rings, short legs, a cyclops eye in the center of her face, and two small wings on her back. But unlike Quarble, her eye has several eyelashes, and she has feminine dark green lips.

Before she was cursed, Quillble was a red greed demon who was not covered in quills. A small mole or freckle is more prominently noticeable on her cheek.

Quillble is initially solemn when explaining her exile to Quarble. She also has a cheeky side, interrupting Quarble mid-sentence and taking her leave by teleporting away.

If Ninja has died before, Quarble appears, surprised at what took place. He questions Quillble, who introduces herself as "Quillble." Quarble is confused, since he has never heard of Quillble or seen her before. Quillble goes on to say that she was exiled a long time ago, when she was cursed along with her Messenger. Quarble seems to recognize Quillble's voice for a moment, but before he can finish his thought, Quillble taunts him, then teleports away. Quarble follows suit and also teleports away.

If Ninja hasn't died before, Quarble does not appear at all, and Quillble just teleports away. Either way, time unfreezes itself. Ninja looks around, confused.

At the top of Fire Mountain, Monk watches as Ninja and Quarble jump into the Voodoo Heart, chasing after their dark counterparts. Quillble teleports to Monk's side, explaining that she found another clue related to the cultists. Monk informs Quillble that the Primal Fear can wait, and that the two of them have reached one of the branching points mentioned by The Prophet. She requests for Quillble to watch over Ninja and Quarble, so Quillble obliges and teleports away.

If Ninja loses 5 races against the Dark Messenger in the Voodoo Heart, Quarble dies. However, Quillble shows up to rewind time, reviving Quarble and sending Ninja back to the beginning of the challenge.

After Ninja loses 5 races against the Dark Messenger in the Voodoo Heart, he and Quarble are teleported away by Quillble, and a black screen appears where Quillble will make one of four possible comments.

In the official The Messenger Discord server, The Shopkeeper revealed a lore tidbit about Monk and Quillble.

Spritesheet of Quillble while she is under the influence of the "Curse of Quills." 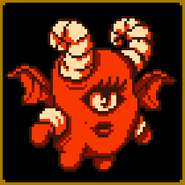 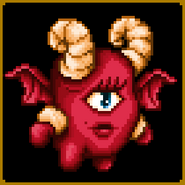 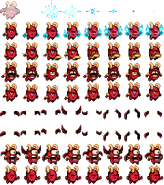