Ninjas are characters in The Messenger. They are humans who hide away in Ninja Village, training to protect themselves from the threat of the demon army.

Ninjas are dressed in traditional blue garb. Sword sheaths are strapped to their backs. Most ninjas have purple-blue outfits, but the main character of the game, Ninja, sports a green-blue outfit. The Ninja Elder dons a conical straw hat, and Ninja also dons one whenever he is in the 16-bit era.

Ninja is one of the ninjas who lives in Ninja Village. He is tasked by The Bowman to leave the village and to carry the scroll to the top of Glacial Peak.

Rock Lesieur is a sterotypical ninja from Ninja Village. He tutors other ninjas on the Cloudstep technique.

The Ninja Elder is an old man who teaches history lessons to the ninjas of Ninja Village. Ninja is one of his rebellious students.

Intro cutscene, depicting a few ninjas near a campfire.

Intro cutscene, depicting ninjas in the middle of training.

Ninja, the main protagonist of the game.

Ninja, donning a conical straw hat after traveling into the future.

A stereotypical ninja from Ninja Village. 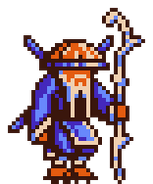 Spritesheet of ninjas and the Ninja Elder.
Community content is available under CC-BY-SA unless otherwise noted.
Advertisement