Ninja Village is the first area of The Messenger. It is a village of ninjas and is Ninja's home. It introduces exposition for the beginning of Ninja's journey, and the Cloudstep technique is explained here as a tutorial. 500 years later, Ninja Village becomes a village of soldiers and is Soldier's home.

The east side of Ninja Village leads to Autumn Hills.

Ninja Village has yellow and brown color architecture with green accents. There are green plants. In the background are an orange background with aqua clouds tinged with orange, and a yellow sun in the upper-left corner of the screen. When the demons attack, the color scheme changes to orange and red.

Ninja Village has gray futuristic architecture. There are red plants, and it's perpetually nighttime with a starry sky and a full moon in the upper-left corner, like Autumn Hills. When the demons attack, the color scheme changes to red.

In 16-bit, travel to the leftmost side of the level. Jump onto the floating platform and Rope Dart the vertical wall in the tall section of the tree. Climb up to reach the Power Seal room. 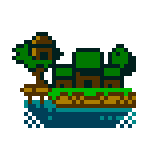 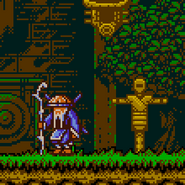