To Break the Curse (Music Box)

A Melody to Break the Curse (Music Box)

The Music Box is the final area in The Messenger. The music box is one of Muse's mesmerizing trinkets, her final creation. The Demon King placed a curse on humanity using the Music Box and inserted Phantom into it to keep the curse alive forever.

The Music Box is a small brown chest-shaped box with gold trimming, a golden lock, a silver winding key attached to the right side, and the design of a red rose on the front lower half.

The Music Box is filled with a network of golden organ pipes. In the background are blue organ pipes, rotating gears, and trumpets. Some of the pipes release steam. The Music Box is also decorated with piano keys, red curtains, red roses growing on green vines, red candles, and red diamond-shaped crystals.

Same as 8-bit, but the background organ pipes, gears, and trumpets are brown instead of blue; the curtains are fuchsia instead of red; and the roses, candles, and crystals are pink instead of red. 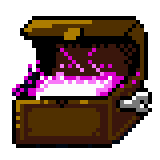 The spritesheet for the light that emanates from the Music Box when the box is open.

Music Box cutscene, depicting some of the interior of the Music Box.

The Prophet describes the importance of the Music Box.

Music Box, in the Tower of Time HQ. 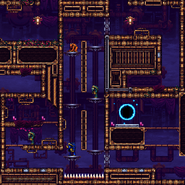 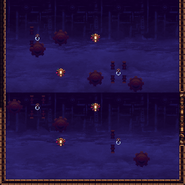 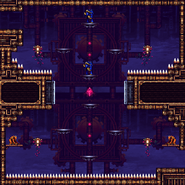