Queen of Quills: Kneel before me!

Queen of Quills: A Fallen Messenger of strength unmatched. She sacrificed everything to contain the Primal Fear.

"KNEEL BEFORE YOUR QUEEN, AND RECEIVE THE CURSE OF QUILLS!" ― Queen of Quills

Before the events of The Messenger, Monk was a promising Messenger who restored Rivière Turquoise by bringing the Butterfly Matriarch. She also defeated the Primal Fear that once ruled Quillshroom Marsh. However, as the Primal Fear died, it cursed Monk and transformed her into a Fallen known as the Queen of Quills. As the Queen of Quills, she transforms trespassers in Quillshroom Marsh into mushrooms.

Both the Queen of Quills and Monk wear orange clothes with yellow accents. She wears a low-cut orange vest with short sleeves, an orange loincloth, an orange mouth balaclava, orange shoes, yellow lower-arm bands, and yellow lower-leg bands. However, while Monk's clothes are intact, the Queen of Quills's clothes are mostly in tatters, at least partly due to the thorns growing out of her body; only her balaclava remains intact.

On the top of both the Queen of Quills and Monk's head are two yellow segmented cone-shaped horns pointing upward, surrounded by her long brown hair. Both the Queen and the Monk have parted bangs, and pigtails that end with yellow and orange hair decorations, but the Queen of Quills's pigtails are constantly in motion, moving up and down like snakes.

Monk's choice of weapon is a brown whip, while the Queen of Quills wields a green prickly whip. Her Tower of Time statue depicts her wielding a tall staff.

The Queen of Quills is intimidating and evil. She threatens Ninja with her Quillshroom army. Despite being evil, the Queen of Quills show honor; she is initially antagonistic towards Ninja in the first half of the game, fighting him in a duel, but in the second half of the game, Ninja can speak to her (provided he doesn't have the Magic Firefly), and she concedes that she lost the duel and does not make any attempts to attack Ninja again. Though, she still threatens Ninja, saying that her Quillshroom will still try to attack him.

When Monk first awakens, she is panicked and frantic, since from her point of view, she was just pulled out of the Primal Fear fight. But even in her confused state, she cares about her friend, the Butterfly Matriarch, immediately asking Ninja's Magic Firefly about the Matriarch's well-being. Monk has a good conscience, as shown when she shows regret over what happened to the marsh and questions what she did as the Queen of Quills.

There are four metal rings total, two on a lower tier and two on a higher tier. Queen of Quills transfers back and forth between the metal rings of a specific tier and hangs from them during the battle.

Queen of Quills's whip uncharacteristically deals 2 damage instead of 1 damage.

After reaching or passing the 29 HP threshold for the first time, the Queen of Quills will hop to a metal ring, then hop back to the center ground level to perform a "flurry attack." She'll then return to her standard attack pattern. The same deal happens with the 14 HP threshold but she follows the "flurry attack" with a guaranteed "jumping-whip attack."

If a parachute seed touches Ninja, it does no damage, but Ninja transforms into a helpless mushroom creature and cannot move. Any Wallaxers that were active will disappear from the arena. The Queen of Quills jumps down to ground level and walks slowly towards Ninja with her whip at the ready. If she reaches Ninja, she'll whip Ninja, which deals damage and snaps Ninja out of his mushroom form. Ninja can also spam jump/attack in order to break free and return to his normal form; the number of times required to spam the button increases each time, going 5, 10, 15, 20, 25, then capping out at 27 times total. Breaking free from mushroom form makes Queen of Quills return back to her standard attack cycle.

If Ninja fails to utilize the Wallaxers to reach Queen of Quills and knock her down to the ground, she'll jump down to the ground level and perform a jumping-whip attack three times in a row, where she homes in on Ninja's location and jumps slightly above Ninja, then as she descends, she attempts to whip Ninja. Ninja can duck at the moment she's about to whip him to avoid taking damage. (If Ninja ducks too early, then the Queen of Quills will account for this.) Alternatively, Ninja can run away before the whip strikes him.

There's also some sort of hidden mechanic where if Ninja does X damage during the later half of the battle, the Queen of Quills will perform the "jumping-whip attack" outside of her standard attack pattern.

As Ninja travels through Quillshroom Marsh, he can enter a shop and speak with The Shopkeeper. Ninja asks about the current area, and The Shopkeeper tells of the legend of the Primal Fear who used to rule the marsh until it was defeated by a brave monk. However, with the Primal Fear's dying breath, it cursed the monk forever, and the monk still roams the marsh, turning any trespassers into fungi. If Ninja enters the shop before the Queen of Quills, he can inquire about the upcoming boss fight. The Shopkeeper warns Ninja that she senses a Fallen up ahead and explains that Fallen are Messengers whose quest came to a tragic end, their power corrupted by demon magic. The Shopkeeper ponders if it's the same Monk she once knew.

Ninja enters the room of the Queen of Quills. Unaware that the Queen of Quills is evil, Ninja warns her to leave since the marsh is filled with monsters. The Queen of Quills reveals that she commands the Quillshroom army and that she plans to add Ninja to it. However, she is caught off guard by the fact that Ninja carries the scroll. She yells at Ninja to kneel before her and to receive the Curse of Quills. The two engage in battle, and Ninja emerges as the victor. Upon delivering the final blow against her, time freezes. Quillble appears to save her, teleporting the Queen of Quills away in a manner identical to how Quarble saves Ninja. If Ninja has encountered Quarble at least once earlier in the story, then Quarble appears, followed by Quillble revealing that she was exiled a long time ago when she was cursed along with her Messenger.

After Ninja gains the power to freely time travel, he eventually travels to Rivière Turquoise. Ninja can enter a shop in order to speak with The Shopkeeper and ask about the area. She explains that the sacred grove used to ruled by demons until a powerful Messenger drove the demons out and brought the Butterfly Matriarch so that the grove could heal and become lush again. Ninja is confused, since the 8-bit era is charred and the 16-bit era is lush, meaning that there would have had to have been a Messenger between his two time periods. The Shopkeeper tells Ninja not to think about it too much. After traversing though Rivière Turquoise, Ninja defeats the brainwashed Butterfly Matriarch, who gifts Ninja with a Magic Firefly. Before the Butterfly Matriarch leaves, she makes a passing comment that Ninja reminds her of the monk that once saved her, wondering what became of her.

Monk gasps for air and exclaims about the Primal Fear, still in the same mindset as she was the moment she defeated the Primal Fear and became cursed. The Magic Firefly tells Monk to calm down, explaining that she fell victim to the Curse of Quills. Monk is still in alarm and asks why the Magic Firefly is here and if the Butterfly Matriarch is safe. The Magic Firefly reassures her that everything is fine. Monk questions what she did while she was brainwashed, then takes her leave to talk to The Prophet, jumping straight up into the air and out of sight. The Magic Firefly informs Ninja that Monk will be fine, and that there has never been a stronger Messenger.

Ninja returns to 8-bit Glacial Peak where he finds Monk waiting near some frozen lanterns. Monk explains that she spoke to The Prophet earlier, so she learned that Ninja has a real shot at breaking the curse upon the world. Ninja asks Monk if she was once a Messenger, and she confirms it, explaining that her power was to travel to the past, unlike Ninja whose power is to travel to the future. Monk continues on to say that The Prophet instructed her to help out Ninja so that he could save his friend. Monk proceeds to jump straight up into the air and whip the ice-encased lanterns, which breaks the ice away to make the lanterns usable for Ninja. Monk bids Ninja a farewell and takes her leave, jumping straight up into the air and away from view.

Monk is seen again during the ending sequence, waiting at the top of the Tower of Time with The Artificer and The Prophet. The trio are waiting for Ninja, The Shopkeeper, and Phantom to return back safely. Monk acts impatient, chiding herself for not going into the Music Box herself. But soon, Ninja, The Shopkeeper, and Phantom do return, and all seems well. However, the Mask arrives on scene, and The Prophet comments about the direness of the situation. Monk asks how the Mask can be stopped, but The Prophet and The Shopkeeper are discouraged that the group has any chance of stopping the Mask. In spite of The Prophet and The Shopkeeper's grim outlook, The Artificer reminds the group that everyone present is attuned to the scroll, so the six of them can "do the thing" to combat the Mask. The group each raise an arm into the air, teleporting away to form the Arcane Golem. The Arcane Golem and the Mask struggle in a laser beam duel, but the Arcane Golem ekes out a victory, shattering the Mask into many pieces.

After Ninja and Quarble jump into the heart of Fire Mountain to chase after their dark counterparts, Monk drops from the sky, landing on the top of the volcano. She remarks that Ninja's outfit is identical to that of the clan that taught her how to Cloudstep. Quillble teleports to Monk's side, informing her that she found more information related to the cultists. Monk tells Quillble that the Primal Fear can wait, and that they have reached one of the branching points mentioned by The Prophet. She requests Quillble to watch over Ninja and Quarble, so Quillble obliges and teleports away.

In the official The Messenger Discord server, The Shopkeeper revealed a lore tidbit about Monk and Quillble.

In the official The Messenger Discord server, during the 6th opening of #the-shop text channel, Rainbowdragoneyes entered the shop and showed off a preview of a unique music track for Queen of Quills. 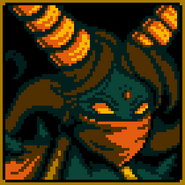 Queen of Quills's quill sprite from her "flurry attack."

Official T-shirt design for PAX East 2018, which depicts the Queen of Quills in the upper-left. 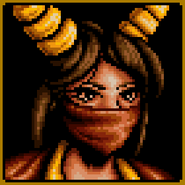 Monk's sprite for the ending.