Mermofwizquard is an enemy in The Messenger.

Mermofwizquard is a humanoid wizard with a long white tri-pointed beard. He wears a purple-blue wizard robe and a pointy wizard hat with a brim. The edge of Mermofwizquard's robe sleeves and robe hem are laced with white. His face is cast in shadow, but his green glowing eyes are still visible.

The hem of Mermofwizquard's robe glows green as he's using magic to levitate off of the ground. When he's knocked to the ground, his robe hem stops glowing. Mermofwizquard's magic projectiles glow the same shade of green as his levitation magic. When he's casting magic projectiles, his eyes glow more intensely. When he's teleporting, he transforms into a small glowing green orb that temporarily splits into two identical orbs before both orbs reunite at his teleport destination.

Mermofwizquard floats in place, shoots 3 tiny green magic projectiles outward in a circular arc towards Ninja, teleports to another location within the room, then repeats the process. These tiny projectiles continue flying in a straight line and pass through solid walls. While Mermofwizquard is teleporting, he transforms into a green glowing orb (that splits into two pieces then reunites), and he is completely intangible until he reappears. He telegraphs his teleport destination with his first green glowing orb and finishes teleporting when the second green glowing orb unites with the first orb.

Mermofwizquard has 1 health of armor while he's floating in the air. This armor must be depleted before he can be killed. When Mermofwizquard loses his armor, he careens downward until he lands on the floor. He'll sit on the floor stunned, unable to move for approximately 3 seconds. If he is not killed in time, Mermofwizquard will snap out of the stun, regenerate his armor, and return to his normal attack pattern.

As Ninja travels through the Catacombs, he encounters Ruxxtin for a second time. Ruxxtin summons three Mermofwizquards before leaving. 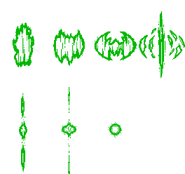 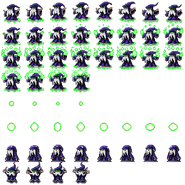 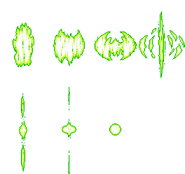 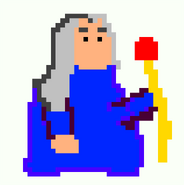 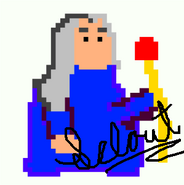 A promotional image that features a fiery Mermofwizquard.