The sky serpent who always wanted to be a butler.

"It's not my birth name, but I always wanted to be a butler." ― Manfred

Manfred, also known as Manfred the Sky Serpent, is a boss in The Messenger. He is the seventh boss of the game and is fought at the end of Cloud Ruins.

Initially, Manfred is brainwashed by Barma'thazël to attack Ninja in Cloud Ruins, but after being cured, he becomes Ninja's companion. Manfred later returns Ninja's favor by rescuing him before he falls into a river of lava in the Underworld.

After Ninja frees Manfred from a chunk of ice in Glacial Peak, Ninja can speak with Manfred at any time in order to be taken to Elemental Skylands. There are several Manfred auto-scroller sections in Elemental Skylands, in which you control Manfred to shoot fireballs at enemies. You also control him during the Clockwork Concierge boss fight.

Manfred is a long segmented serpentine creature who flies through the sky. His head is shaped like that of a typical dragon. He has two long horns at the top of his head, two pointy ears, and a small horn on his nose. He is mostly blue, with a light underbelly with a yellowish tone.

When brainwashed, he is mostly red with a light underbelly with a reddish tone. The upper portion of his body is covered in small spikes. His eyes are glazed over with no visible pupils. He sports more teeth than normal.

Generally, Manfred is laid-back and speaks in a casual manner. His life-long dream is to become a butler, so much so that he changed his name to "Manfred." He idolizes the Clockwork Concierge as his hero.

During the first runthrough of Clouds Ruins, there are 3 separate rooms that are composed of long horizontal stretches of clouds. Evil Manfred appears from the left side of the screen to chase Ninja, locking Ninja into an auto-scroller chase sequence until he successfully traverses the room. Manfred destroys the clouds he touches and will closely match Ninja's elevation while approaching closer and closer. If Manfred touches Ninja at all, an instant death will result for the player. Certain sections of the auto-scrollers have wide gaps that can't be vaulted with a normal jump, but lanterns situated above can be Cloudstepped from to safely cross these gaps.

The first and second chase sequences do not have other enemies present, but the third chase sequence features a single Ountarde who appears midway through the chase, jogging ahead of Ninja. The Ountarde doesn't serve an important purpose, but Ninja can either watch and follow it until it decides to jump off the map, or he can kill it.

Manfred flies high erratically at the top of the screen. After about 5 seconds, he freezes in place, and from tail-to-head, each segment of his body flashes once. Once his head flashes, he locks onto Ninja's current location and dives at him, destroying any clouds he contacts.

Manfred appears on the side of the screen furthest from Ninja and sweeps across it. If damaged during this attack, Manfred will recoil and his trajectory will be altered. He can be juggled indefinitely during this with consecutive attacks. Manfred switches randomly between two sideswipe variations.

Variation B: Manfred spawns in the upper section of the screen and travels in a V-shaped formation, first down towards Ninja's location, then back up. It's possible to position yourself in a way at the ground level to force Manfred to destroy a few cloud chunks.

Manfred appears from the top of the screen and dives downward at Ninja's current location, destroying any clouds he comes into contact with.

Manfred appears on the side of the screen furthest from Ninja and shoots fireballs while bobbing up and down, keeping rhythm with Ninja's elevation. This fireballs attack continue infinitely until at least 1 damage is dealt to Manfred. After Manfred is hurt, all clouds respawn, and Manfred falls to the ground where he remains stunned for about 5 seconds or until 10 damage is dealt to him before he snaps out of it and leaves.

During Phase 3, Cloudstepping the fireballs is a requirement in order to reach Manfred since the gap is too large. (Alternatively, you can hit Manfred from afar with a shuriken.)

Manfred appears from the upper-left corner or upper-right corner, flies downward, then flies horizontally through the floor, destroying all but a few clouds at the opposite end of the arena. He then flies upward and leaves.

Normally Manfred spawns at the side of the arena furthest from Ninja, but if there are too many clouds missing on an edge of the screen, then Manfred prioritizes spawning on the missing cloud side instead.

While traversing to each of the 4 islands in Elemental Skylands, the player controls Ninja riding on Manfred through 4 separate auto-scroller sections, where they must navigate Manfred to avoid obstacles and Space Shooter Enemies. Press the attack button briefly to shoot a fireball to the right, which deals 1 damage. Hold the attack button and then release to charge up a larger fireball, which deals 5 damage and penetrates through multiple enemies. The Clockwork Concierge boss fight also involves controlling Manfred.

During these gameplay segments, the player's hurtbox is actually Manfred's head, rather than Ninja.

As Ninja travels through Cloud Ruins, he is confronted by Evil Manfred during three separate chase sequences along treacherous cloud paths. After reaching the end of each chase sequence, Manfred flies off. In the shop just before the Manfred boss fight, Ninja can speak with The Shopkeeper, who delivers a verbal message from The Prophet. "AND ON THIS DAY, THE MESSENGER SHALL UNWITTINGLY MAKE HIS LIFESAVER INDEBTED TO HIM." The Shopkeeper is not sure what the message means but recommends attacking Manfred's fireballs.

Ninja encounters Manfred in the next room, an arena of clouds, and the two engage in combat. Ninja defeats Manfred, freeing him from Barma'thazël's mind control and returning the sky serpent back to his normal blue color. Manfred flies around Ninja as hearts appear from his body, indicating his appreciation. After he flies off, Barma'thazël appears in his disguised form and reveals that Manfred was his "slave pet," and then removes his disguise, to the shock of Ninja. The confrontation is cut short when the Ninja is cast into the Underworld.

Ninja defeats Barma'thazël, but Barma'thazël causes an explosion that destroys the room, which results in Ninja falling down a long chasm with a river of lava at the bottom. At the last moment, Ninja is rescued by Manfred. While the two chat with each other, Manfred introduces himself as "Manfred," explaining that it's not his birth name but he goes by that name because he always wanted to become a butler. Manfred flies eastward and ferries Ninja across the ocean, all the way back to the future version of Ninja Village, where the Demon King and his armies are threatening a village of soldiers. Ninja leaps off of Manfred's back and throws a barrage of magical shurikens, driving away the demon army.

Manfred nervously tries to speak to the Clockwork Concierge but is unable to do so. Ninja explains on Manfred's behalf that Manfred always wanted to be a butler and that the Concierge is his hero. The Concierge inquires for Manfred's name, and the sky serpent responds with "Manfred." The Clockwork Concierge finds the name acceptable and takes in Manfred as his apprentice, to Manfred's delight. The Concierge notes that Manfred's vocabulary is the first thing that needs to be addressed when he comes back for training. Manfred flies Ninja back to Glacial Peak, where he remains for the rest of the game.

In Ninja Village, Ruxxtin asks Ninja how he plans to reach Voodkin Island. Ninja mentions that he was considering asking his friend, Manfred, to fly him there. Ruxxtin counters, saying that it would ruin Manfred's internship with the Clockwork Concierge, which is not something a friend would do. Eventually, Ninja is convinced to take Ruxxtin's skull ship to Voodkin Island rather than finding Manfred.

Spritesheet of Manfred frozen in an ice block.

Spritesheet of the top of Manfred's ice block.

Spritesheet of ice particles that fly from Manfred's ice block as it's being broken. 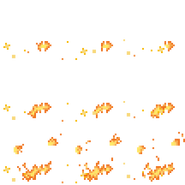 Spritesheet of flames that appear when Manfred shoots and charges a fireball. 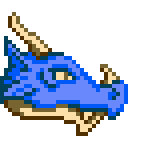 Concept artwork of a proposition for Ninja to ride Manfred chopper style. 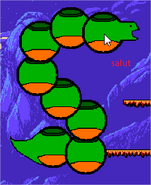 Placeholder artwork of Manfred in an early version of Elemental Skylands.

Key art #3, which depicts Evil Manfred in the lower-right corner.