Howling Grotto is the sixth area of The Messenger. It is a cave filled with wind tunnels, and Ninja glides on the wind tunnels via the Wingsuit. Howling Grotto was once the home to a race of cave-dwelling creatures who built structures out of the emerald found in the cave.

The west side of Howling Grotto is accessed from Bamboo Creek, and the east side leads to Quillshroom Marsh. In 16-bit, an underwater maze leads to the Sunken Shrine.

Howling Grotto is a green-themed cave with green architecture and blue objects. Much of the architecture has triangle designs. The cave is filled with emeralds.

In 8-bit, in a tall room with three Ranged Kappa in a vertical line directly across from four breakable blocks, break the blocks and head right into the Power Seal room. Fly through the air currents while avoiding sawblades, spikes, and swinging spikeballs in order to reach the Power Seal.

In 16-bit, in a tall room with a time rift and a single breakable block in the middle of the room on the right edge, break the block and head right into the Power Seal room. Avoid the crusher blocks that lead into spikes and avoid falling to death while navigating to the Power Seal. 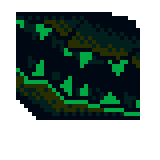 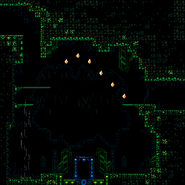 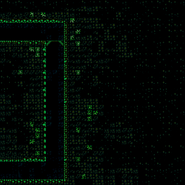 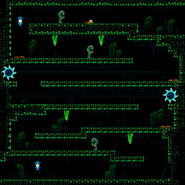