In Picnic Panic, Voodoo Totem is revealed to be piloted by the wisp of the Emerald Golem.

Emerald Golem is a giant green-gray rock golem with chunks of emerald sticking out of its tall rectangular hands and its flat shoulders. The emerald chunks on its shoulders are long and pointy, like spikes, which retract after Ninja deals enough damage to Emerald Golem's core. Emerald Golem's body is rectangular, with a spherical glowing green core at the center of its chest. The core has a green-gray cross over its center and around its circular edge, similar to a stereotypical window frame.

Emerald Golem has a tall rectangular and gruff-looking face. Its eyes are two flattened holes in the middle of its face that glow green. Emerald Golem's face is split into two halves that open up like a mouth to reveal a glowing green ball of light with an angry face, which is its true form without the rock golem. Also when the mouth opens up, the rock golem's eyes become rounder and glow more brightly.

Emerald Golem's hands rest in their neutral positions at the ground on each side of its body. Generally the hands raise up and pound down into the ground directly beneath each hand, but the hands can also move freely through the air, independent of the body.

Emerald Golem is initially annoyed with Ninja for starting a fight with it, but Emerald Golem and Ninja quickly figure out that the whole fight was just an unfortunate misunderstanding. Emerald Golem is polite about the whole affair, forgiving Ninja for destroying its golem, and even adjusting the wind currents so that Ninja may leave Howling Grotto. It's also very considerate of Ninja's feelings, waiting for Ninja to leave before crying about the loss of its golem.

At this point, Ninja must fly up one of the wind tunnels then attack Emerald Golem's true weakpoint. After some amount of time passes, the core and shoulder spikes show signs of returning to normal, which is Ninja's signal to hop off of Emerald Golem's shoulders before the spikes return and deal damage to Ninja. After enough time passes, the core glows green again and has its 8 HP restored, Emerald Golem's hands stomp the ground a couple of times in a row, the wind tunnels disappear, the shoulder spikes return, and the true weakpoint hides away again. Emerald Golem returns back to its regular attack pattern.

Emerald Golem loses its golem, then the entire room is filled with wind tunnels and floating Ki charges. Emerald Golem's true weakpoint, a glowing green ball of light with a face, arises from the bottom-middle part of the room. It then starts flying all over the arena in random directions.

Ninja traverses through the entirety of Howling Grotto until he reaches the shop just before the Emerald Golem boss room. Ninja can talk to The Shopkeeper to ask about the upcoming boss. The Shopkeeper explains to Ninja that the next boss is a challenge, the boss is big, and that the boss understands that the best defense is a good defense. Ninja is left confused by these statements.

Ninja enters Emerald Golem's domain, a pitch-black room that is slowly lit up by Emerald Golem's glowing green core, revealing the large and imposing Emerald Golem. Emerald Golem pounds the ground several times with its fists, which brings down walls of rock on both sides of the room that prevent Ninja's escape.

Ninja destroys Emerald Golem's golem, which leads to an air battle between Ninja and Emerald Golem's true form, a glowing green ball of light with a face. Ninja also defeats this form of Emerald Golem, and the two slowly float down to the ground. Emerald Golem complains about Ninja destroying its golem, but Ninja defends himself from the accusation, stating that he was only acting in self-defense. Emerald Golem argues back, maintaining that it had been digging through the caverns for centuries when it was Ninja who started the engagement. The two argue for a bit, until both parties realize that it was just one big misunderstanding.

Ninja repeatedly apologizes for destroying Emerald Golem's golem, and Emerald Golem politely forgives him each time. Ninja then asks where the exit is located, and Emerald Golem lets him know that it will adjust the wind currents so that Ninja may leave. Emerald Golem wishes Ninja good luck on his journey and creates a remarkably tall wind tunnel. Ninja takes flight with his Wingsuit, taking the wind tunnel out of Howling Grotto and into Quillshroom Marsh. Emerald Golem wistfully looks up towards the ceiling where Ninja left, double-checking that Ninja is completely out of sight before crying over the loss of its golem. 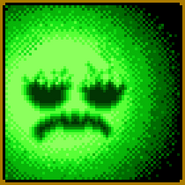 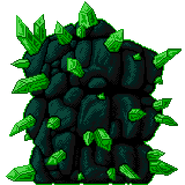 Key art #2, which depicts Emerald Golem on the bottom.

Key art #2, a version of the artwork that captures a better view of the top of Emerald Golem's head.

Key art #3, which depicts Emerald Golem without its golem near the top and in the middle.