Demons are characters in The Messenger. Eons ago, demons invaded the human realm, eradicating the sky giants and massacring many humans in Forlorn Temple. Led by the Demon King, the demons would continue to torture humanity for many curse cycles. They are spread across the world, and their base is in the Underworld.

Demons are at odds with the Order of the Blue Robes, fighting them across both time and space. However, a subset of demons known as greed demons work alongside Messengers.

Demons vary in shape and appearance, but many demons, such as the Demon King, Barma'thazël, Quarble, Ountarde, and Demon Hives, are red in color. Demons typically have horns on their heads, and Barma'thazël and greed demons in particular have ram-shaped horns. The Demon King, greed demons, and demons during the Music Box cutscene are depicted with wings.

Kappa (Blue Kappa, Green Kappa, Ountarde, and Ranged Kappa) all have turtle shells on their backs.

The Demon King is the leader of the demon army that threatens the world. After the demons eradicated the sky giants, killed many humans in Forlorn Temple, and chased the remaining humans out of the temple, one man known as Phantom returned back to the temple in an attempt to take down the Demon King. Phantom failed, and the Demon King corrupted Phantom's Music Box, which would act as a tether for demons to return to the human realm every 500 years. The Demon King then placed a cursed Mask on Phantom and inserted him into the Music Box, to play a tune that would keep the curse on humanity alive forever.

Barma'thazël, the Demon General, is loyal to the Demon King. During the demon invasion of past Ninja Village, the Demon King commands him to keep an eye on Ninja. Barma'thazël disguises himself as the Wanderer and follows Ninja around, all the way to Cloud Ruins. Barma'thazël brainwashes Manfred to attack Ninja as he makes his way through Cloud Ruins, but Ninja defeats Manfred, freeing the sky serpent from the demon spell. After Manfred's defeat, Barma'thazël drops Ninja down into the Underworld, in an attempt to take Ninja's scroll. Ninja treks all the way to Barma'thazël's room in the Underworld and defeats him. Barma'thazël disappears in a flash of light and destroys the room. But as it turns out, he did not die, and he appears in the alternate timeline of Picnic Panic, kidnapping Phobekins in order to lure Ninja into a trap.

Greed demons betrayed demonkind and work together with Messengers. Greed demons seem to like Time Shards

Various Kappa and Skelout enemies are strewn throughout the world, and they attempt to kill Ninja on his journey.

Various Demon Hives are strewn across the walls of the Underworld. They do not attempt to kill Ninja but instead act as convenient anchors for Cloudstepping purposes.

The Demon King, the ruler of demons.

Quarble, an example of a greed demon. 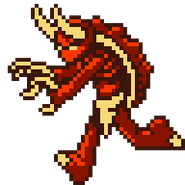 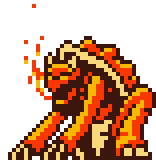 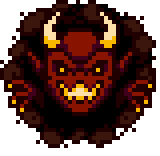