The Dark Messenger is a pseudo-boss in the Picnic Panic DLC of The Messenger. He and Dark Quarble are created via a voodoo ritual at the top of Fire Mountain due to Barma'thazël's handiwork. Ninja and Quarble must duel against their dark counterparts in a series of races inside the Voodoo Heart.

The Dark Messenger's outfit is a reskin option for Ninja, accompanied with accepting "THE DEAL" from the Voodoo Mask in New Game +.

During a very specific race room (1W-4L), the Dark Messenger is placed on a moving platform near the top of the screen as Ninja struggles with obstacles at the bottom of the room. As the Dark Messenger is slowly escorted to the finish line, he playfully crouches up and down throughout the race, which would suggest he does have some form of self-awareness.

Ninja is pit in a series of races against the Dark Messenger. He must race to the finish line and attack the Voodoo Idol at the end of each course before his opponent does. The Voodoo Idol can be Rope Darted for quicker activation.

After the first tutorial room is finished, a progression bar with greed demon indicators appears at the top of the screen. The first to reach 5 wins will win the challenge. The number of current wins and losses determines which race room you encounter, with there being a total of 25 different race rooms.

Ninja reaches the top of Fire Mountain, where he encounters Barma'thazël holding the Phobekins hostage in a wooden cage. Barma'thazël traps Ninja using the nearby Voodoo Altar, creating evil clones of Ninja and Quarble. He explains that Voodoo Idols reside in the Voodoo Heart, which are capable of damaging greed demons. Ninja must reach the Voodoo Idols before his dark counterpart does, otherwise he risks losing his protector, Quarble. Barma'thazël teleports away with the Phobekins cage, followed shortly by Quarble teleporting on scene. Quarble urges Ninja to prevent the situation, stating he would rather not die. The Dark Messenger and Dark Quarble hop into the Voodoo Heart, so Ninja and Quarble take pursuit. 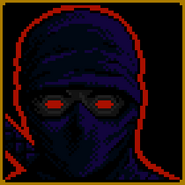 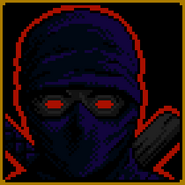 Spritesheet of the Dark Messenger and Ruxxtin surfing together.

Spritesheet of the Dark Messenger receiving a Game Over while surfing with Ruxxtin. 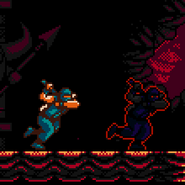 An amalgamate of many 16-bit spritesheets of the Dark Messenger with the scroll. 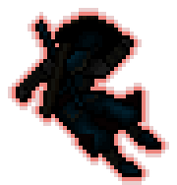 Sprite of the Dark Messenger passing on the scroll. 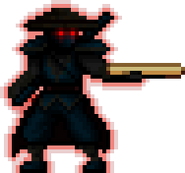 Combined two sprites for a full Dark Messenger passing on the scroll. 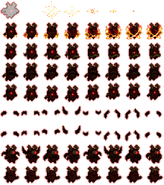