The Corrupted Future is an area in The Messenger. It is the future the Order of the Blue Robes is trying to prevent, a corrupted version of The Void.

The only entrance to the Corrupted Future is a portal in The Artificer's room in the Tower of Time HQ, activated with the Demon Crown. However, this portal is destroyed after completing the Abomination chase sequence.

The actual Corrupted Future cannot be explored until Ninja has obtained the Magic Firefly as he'll reach a wall that cannot be traversed without the help of Magic Fireflies.

In the mist-covered background is an ocean filled with towering shadowy tentacles that constantly wriggle around, shadowy human-shaped figures raining from the sky and into the ocean, and a shattered moon in the upper-left corner of a dark starry sky.

Magic Fireflies are scattered around in various places, and some are trapped in spherical chunks of amber. When the Magic Fireflies are attacked, they reveal the 8-bit era in a rectangle around themselves, displaying architecture and the background from the 8-bit Tower of Time. 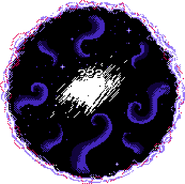 The clean version of the Corrupted Future's map.