A Home Amongst the Clouds (Cloud Ruins)

Civilization in the Sky (Cloud Ruins)

Cloud Ruins is the eleventh area of The Messenger. It is a crumbling ruins, high above the clouds. Centuries ago, Cloud Ruins was the home to sky giants before they were eradicated by demons.

Cloud Ruins is a beige ruins composed of columns and crumbling buildings. The ruins are decorated with mystic blue runes. Throughout the ruins are pieces of crumbling statues of the sky giants, like lone heads, lone hands, and lone feet. Green vines, moss, and shrubs grow all over the ruins, and many trees are planted on pieces of floating ground.

The background is black and foreboding, with lightning strikes and fast-moving clouds sweeping across the top and bottom of the screen from right to left. Due to the lack of sunlight, the background architecture is dimly lit.

Same as 8-bit, but the background is bright and sunny, with calm white clouds close to the bottom edge of the screen. In the distance are buildings similar in nature to the ruins that Ninja directly explores.

In 8-bit, in a tall vertical room that is empty besides a breakable block and a moving platform in the lower-left corner, climb to the very top of the room. Head into the next room where there is a singular checkpoint and nothing else. Head below into the Power Seal room where there are three Manhattan Banshees. Rope Dart the Manhattan Banshees and Cloudstep to reach the Power Seal.

In a room with a horizontal time rift next to a checkpoint, drop down through the time rift while heading left. Enter the next room and Rope Dart the ring to the left to reach the Power Seal room. Continuously move to avoid getting hurt by the spikes then collect the Power Seal.

Traverse the entirety of the Cloud Ruins. At the final shop checkpoint, Cloudstep a lantern and climb upward to reach a Power Seal room with two Big Time Shards. 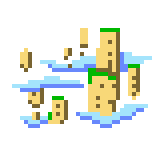