The Butterfly Matriarch, also known as the Bat Matriarch, is a boss in The Messenger. She is the boss fought at the end of Rivière Turquoise.

Her white head and brown body are fluffy, and her eyebrows are also fluffy. Her black eyes are large and round, but they gain many circles of brown when she becomes angry. On her head are two thick yellow antennae sticking up from behind her eyebrows, curving downward to the sides. On the bottom of her body are six black butterfly legs. Two small black mandibles cover her mouth.

As the Bat Matriarch, she resembles a giant brown bat. The middle-bottom section of her left wing is torn.

Once brought back to her senses, the Butterfly Matriarch returns to her kind nature. She admits her mistake and thanks Ninja for ridding her of her rotten core. To show her gratefulness, she allows one of her Magic Fireflies to accompany Ninja on his journey.

The fight starts off in 8-bit. In her bat form, the Butterfly Matriarch flies left and right at the top of the arena, slowly following Ninja so she's always above him. She intersperses between two different attacks: releasing either a sonar beam or two tiny bats from her mouth that fly downward. She randomly switches between two attack pattern types.

The Butterfly Matriarch's body is intangible (but damageable) and does no damage to Ninja.

The Butterfly Matriarch is extremely high up in the air where Ninja cannot reach her. Ninja must wait for a Magic Firefly to appear on the screen and then attack it, changing the arena from 8-bit to 16-bit. In her butterfly form, the Butterfly Matriarch releases a shower of tiny white dust particles that reveals invisible platforms, and then the arena flashes in 8-bit a few times before completely returning to 8-bit. Ninja must utilize the invisible platforms to reach the top of the arena to attack the Butterfly Matriarch. The dust dissipates after about 15 seconds, so the Magic Firefly will reappear if needed. The amount of time it takes for the Magic Firefly to arrive depends on the arena, taking longer in the later arenas, and it spawns on the side of the room opposite of the invisible platforms.

Note: Magic Firefly arrival times are based on when the arena is stabilized as 8-bit. 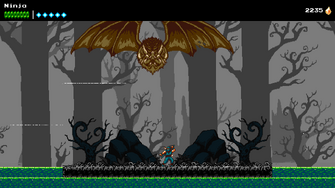 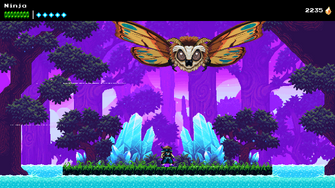 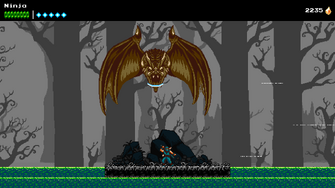 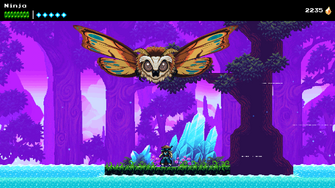 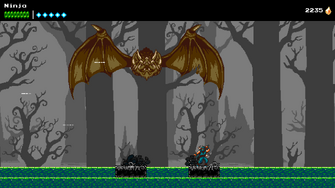 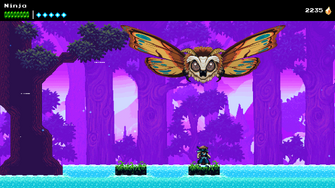 A non-damaging confusion attack, the sonar beam is large and wide, making it difficult to avoid. If Ninja is hit by the sonar, he becomes dizzy for 5 seconds (doesn't stack but does renew), and the directional inputs of left and right become reversed for the player until the dizziness wears off.

Even though the sonar beam doesn't do damage, Ninja experiences knockback as if it was an actual attack. Ninja needs the "Second wind" shop upgrade to use a recovery jump to negate the knockback.

Two tiny bats fly left and right as they move downward, their movements mirrors of each other. With each sweeping movement, the gap between the two bats grows wider and wider. They continue flying downward until they disappear off-screen. These bats deal 1 damage.

Ninja lands the final blow upon the Matriarch, and a bright flash of white light fills up the screen. The light fades, and the room is 16-bit once again. The Butterfly Matriarch is freed from her curse, and she admits that she made a mistake a long time ago, thinking that beauty would fix it all. She thanks Ninja for freeing her of her rotten core. Ninja asks if this was a lesson about judging a book by its cover, and the Butterfly Matriarch replies that it is. She makes an analogy that Ninja took the words right out of her mouth, but before she finishes her thought, she questions if butterflies even have mouths. The Butterfly Matriarch thanks Ninja once again for his help and gifts him with a Magic Firefly to accompany him on his journey.

The Butterfly Matriarch recollects on how she was once saved by a Monk, wondering what became of her. The Matriarch then takes her leave.

Key art #2, which depicts the Bat Matriarch to the bottom-left and the Butterfly Matriarch in the upper-right.

Concept art for an unused dryad boss, who became the Butterfly Matriarch instead.