Master of ballistics considered annoying to hikers, but quite handy to the opportunist Cloudstepper.

Blue Kappa is an enemy in The Messenger. It is based on the mythological Kappa demon from Japanese folklore. Blue Kappa's Picnic Panic counterpart is the Tropical Blue Kappa.

Blue Kappa is a blue turtle-like monster that stands upright. It has a large pointy rhino horn on its nose, and three small horns that line the longitude of its head. Blue Kappa has two arms with long pointy claws. A large spiky ball is continuously generated from a hole on the top of its back shell, which it spits out to attack Ninja. It wears a loincloth.

Blue Kappa stands stationary in one location. At evenly set intervals, it generates and shoots a single spiky ball projectile in a parabolic arc at Ninja. This projectile passes through walls. Most Blue Kappa will turn direction to always face Ninja, but some Blue Kappa remain facing a fixed direction. 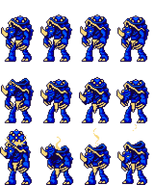