Autumn Hills is the second area of The Messenger, the first level of the game with real gameplay. It is a fall-themed forest, always draped with a night sky and a full moon.

The west side of Autumn Hills is accessed from Ninja Village, and the east side leads to Forlorn Temple. In 16-bit, a southward pathway leads to the Catacombs.

Autumn Hills is a forest filled with red-leafed trees with brown trunks. The background sky is filled with stars, and there is a prominent full moon in the upper-left corner of the sky. Glacial Peak is also visible in the distance.

This Power Seal is located a few screens away from the Tower of Time HQ portal, up and to the right. A Power Seal symbol marks the wall in the upper-right corner of a long horizontal room. If Ninja owns the "Strike of the Ninja" shop upgrade, trigger a fireball projectile from a Ranged Kappa to the west, and wait for the fireball in order to Cloudstep to the upper-right wall. Alternatively, return back to this room during the second half of the game after obtaining the Rope Dart, and Rope Dart the upper-right wall in order to reach it. Climb the wall to reach the Power Seal room, a room filled with sawblades and a single swinging platform. Take the swinging platform over to the Power Seal while avoiding the sawblades.

In 8-bit during the later half of Autumn Hills, a Power Seal symbol is seen near a couple of breakable blocks in the lower-left corner of a certain room below a Ranged Kappa. Break the blocks to reach an underground pathway with a checkpoint and a giant gap. Above the gap are a giant spikeball hanging from a chain and two swinging platforms. Take the swinging platforms across the gap in order to reach the Power Seal room.

Be in 8-bit and return to the room with Power Seal #2 with the "Aerobatics warrior" shop upgrade. Destroy the breakable blocks in the lower-right corner of the room by using a downward Wingsuit attack. Rope Dart the metal rings, avoid swinging spikeballs, avoid floor spikes, and avoid falling to death in order to reach the Power Seal.

What is this place?[] 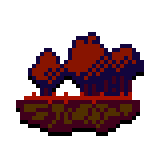