The alphabet is the writing system used in the universe of The Messenger. It is based off of the English language.

Spread throughout the 8-bit Tower of Time are four statues with alphabet letters on their plaques. The statues of Queen of Quills, The Creator, and The Iron Hood all reappear for a second time in the Tower of Time room before Cloud Ruins, while The Bowman statue only has one location in the tower.

In Forlorn Temple, there are two thrones with the word "DEMON" etched into them. The Tower of Time statues and the "DEMON" thrones allow the player to learn all letters of the alphabet, excluding: G/J/K/P/V/X/Y/Z. The remaining letters were discovered as part of the ARG.

Rock on a Shelf[]

A rock with the letter P on it is seen on a shelf in the Picnic Panic version of the shop. Before the release of the Picnic Panic DLC, promotional material of the tiki shop was shared on social media, via The Shopkeeper's Twitter banner.

Above every shop in Picnic Panic is a signboard with the word "TUWHERA" written on it. Promotional material displayed one of these shop signboards before the release of the DLC.

A green hut with a signboard with the word "INNFINITY" on it is found in a very secret area of Voodkin Shore. This secret area is accessed in the southwestern corner of the room with the fifth shop. Be in 8-bit, go to the dead-end with a palm tree and a health jar, and wait near the left wall for about 30 seconds to reveal the secret pathway. "INNFINITY" is a reference to The Shopkeeper's story in Voodkin Shore, about a family of innkeepers.

In the first and second Picnic Panic DLC trailers, shortly after the promotional words "VOODOO MAGIC!" appear, a tiny slab of stone can be seen in the background with the word "TUWHERA" etched into it. In the ARG, this word was required to save The Archivist, who was unable to return to The Void until "TUWHERA" was uttered into it.

Interestingly, this particular slab of stone does not appear in the final version of Picnic Panic, despite being in the trailer footage.

Books from The Archives[]

In the official The Messenger Discord server, The Archivist gave the players an opportunity to view an excerpt from one of three books from The Archives. These books introduced two more letters of the alphabet: J and Z. This also introduced the apostrophe symbol.

Players of the official The Messenger Discord server voted for the lime-green book, Ninja's book. The book contained two pages with an excerpt of Ninja's adventures. With this excerpt, four more letters of the alphabet were introduced: G/K/V/Y. This also introduced the comma symbol and period symbol.

Players of the official The Messenger Discord server were given an opportunity by The Archivist to complete a timeline of stone tablets, ranging from The Alchemist's birth, to the Phantom's curse, and to Ninja's role as The Messenger. If properly placed, The Archivist promised to reveal more information about how he became an immortal being. This timeline of stone tablets revealed the second-to-last unknown letter, the letter P. Only the letter X remained unknown.

The next day, The Archivist confirmed that the proposed timeline was in the correct order and then provided more information on his origins.

After the conclusion of the "Colos or Suses event" in the official The Messenger Discord, Colos and Suses created a Commemorative Plaque as a thanks for everyone who participated. The Commemorative Plaque revealed the final letter, X, along with the numbers 0, 1, 2, 3, and 9.

Mysterious letters began to appear in the official The Messenger Discord server, obtained in various manners. The collected letters are currently recorded at the top of the Discord branch of The Shop.

Ramblings of a Lost Soul[]

In the official The Messenger Discord server, The Archivist delivered a scroll to the Clockwork Concierge to deliver to the community. The document is titled "Ramblings_of_a_lost_soul.png." It revealed the "question mark" symbol and also an alternative version of the "apostrophe" symbol.

"SOUL ADRIFT, ADVENTUROUS HEART.
ANOTHER TIMELINE, ANOTHER OF THE FLESHMANCER'S CREATIONS DOWN.
ANOTHER MINOR WOUND, ANOTHER TRIVIAL CONCOCTION, ANOTHER DEAD END.
STILL NO SIGN OF THE STAR SHARDS.

"SOUL ADRIFT, WORRIED HEART.
THE WITNESSES OF BOOK 1, HAVE THEY REALIZED BY NOW?
NINJA SAW THEIR REMAINS. WITHOUT ECLIPSE MAGIC, WE ARE DOOMED.
HOW I WISH THEY WERE STILL BY MY SIDE...

"SOUL ADRIFT, INDUSTRIOUS HEART.
BUYING TIME THROUGH NINJA'S SIDE QUEST.
BUT HOW TO PREPARE THEM FOR BOOK 2?
A MATTER TO THINK THROUGH BEFORE I RETURN.

"SOUL ADRIFT, DETERMINED HEART.
SO MANY POTENTIAL ADVENTURERS, AND SO LITTLE POWER LEFT.
ONLY ONE VOIDWALKER TO SEE THE TRUTH AND CARRY IT BACK. BUT WHO?
I WILL KEEP WATCHING THEM.

"IT IS TIME THE ARTIFICER REVEALED A BIT MORE."

In reference to the last line of the message, The Artificer made a blog post on the official website.

Ramblings of a Lost Soul - Chapter 2[]

In the official The Messenger Discord server, during a visit from The Shopkeeper in #the-shop text channel, "Ramblings of a lost soul Chapter 2" became an available shop upgrade in the Discord branch of The Shop. After it was purchased, Manfred delivered a scroll and gave it to The Shopkeeper, who then handed the scroll to the community. The document is titled "Ramblings_of_a_lost_soul_Pt_2.png."

"SOUL ADRIFT, RESIGNED HEART
CLOSING ANOTHER TIMELINE THAT COULD HAVE BEEN
HOW MUCH IS ENOUGH, AEPHORUL?

"SOUL ADRIFT, FORLORN HEART
LUANA, I NEED YOUR STRENGTH TO CARRY ME
SOLEN, I NEED YOUR LIGHT TO GUIDE MY PATH

"SOUL ADRIFT, HOPEFUL HEART
ALL THESE MESSENGERS, ARE THEY READY?
PERHAPS IF I SHOWED THEM THE PAST...

"STARS ALIGN AT THE TURN OF SPRING,
A VOIDWALKER IS NEEDED BEFORE THEN."

In the official The Messenger Discord server, The Archivist gave the Clockwork Concierge another scroll to deliver to the community. The initial document, which has a typo, is titled "Archivist_Scroll_3.png," while the updated document is titled "Actual_Archivist-Scroll_3.png."

"AND ON THE SPRING EQUINOX
THERE ARE THOSE WHO WILL KNOW

After the scroll was successfully translated, the Concierge awarded the community 1,000 Time Shards.

While traveling through The Void, the three Voidwalkers stumbled across torn pieces of The Archivist's writing on Dwellers, which was a book titled "Seeds of Evil."

The Archivist sent the community an unfinished scroll known as the "Tidal Wave of Lore." It was mentioned that the document would explain everything the community needed to know before the release of Book 2 (Sabotage Studio's second video game). The document only contained the the letters A, E, P, H, O, R, and U, while all of the other remaining letters were missing. The remaining letters were meant to be slowly collected as the three Voidwalkers ventured through The Void. However, before any additional letters could even be collected, the Tidal Wave of Lore was completely deciphered after five hours in a collaboration effort by the community.

"COUNTLESS MILLENNIA AGO, TWO POWERFUL ALCHEMISTS KNOWN AS AEPHORUL AND
RESH'AN MANAGED TO CREATE THE ELIXIR OF LIFE. AS ALL THINGS IN ALCHEMY
COME AT A PRICE, THE GIFT OF IMMORTALITY CAUSED THEIR BODIES TO DECAY,
LEADING THEM TO CONCEAL THEIR HIDEOUSNESS UNDER COLORFUL ROBES.

"AT FIRST REVELLING IN THE BRIGHT SIDE OF THEIR BITTERSWEET ETERNAL
LIVES, THEY SPENT CENTURIES PROTECTING THE WORLD, NURTURING IT, AND
CREATING WONDERS TO INSPIRE MORTALS. OVER TIME, HOWEVER, AEPHORUL GREW
INCREASINGLY JEALOUS OF THE EPHEMERALITY HE WOULD NEVER TASTE AGAIN.

"THUS BEGAN HIS WICKED JOURNEY INTO THE FORBIDDEN SCHOOLS OF ALCHEMY, A
JOURNEY THROUGH WHICH EVERY LAST BIT OF GOOD WITHIN HIS HEART DISSIPATED
AS HE EXPERIMENTED WITH SOUL, BONE, FLESH, AND BLOOD ALIKE.

"AS FATE WOULD HAVE IT, AEPHORUL EVENTUALLY EMBRACED EVIL AND EMERGED AS
THE FLESHMANCER, A WICKED IMMORTAL WHO BORE NO SECOND THOUGHTS ABOUT
CURSING THE WORLD WITH HIS MONSTROUS CREATIONS. RESH'AN INTERVENED AS
BEST HE COULD, CAUSING UNSPEAKABLE CHAOS AND COLLATERAL DAMAGE TO THE
WORLD AS THE TWO FORMER FRIENDS FOUGHT THEIR ENDLESS WAR.

"AFTER MUCH STRUGGLE, RESH'AN COULD DETERMINE THE FLESH MINIONS' ONLY
WEAKNESS TO BE SOLAR AND LUNAR MAGIC, A POWER GIFTED TO HUMANS BORN
DURING A SOLSTICE. RESH'AN BEGAN TRAINING THESE CHILDREN SO THAT THEY
WOULD BECOME SOLSTICE WARRIORS, TASKED WITH CULLING THE PRESENCE OF THE
FLESHMANCER'S CREATIONS.

"BUT AEPHORUL'S KNOWLEDGE WAS ALSO GAINING GROUND, AND HE EVENTUALLY
STARTED CREATING ODDITIES OF UNLIMITED POTENTIAL KNOWN AS DWELLERS.
DWELLERS WERE IMPERVIOUS TO ALL BUT ECLIPSE MAGIC, A SPECIAL KIND OF
POWER AVAILABLE ONLY TO SOLSTICE WARRIORS DURING A TOTAL ECLIPSE. TIME
WAS ALWAYS OF THE ESSENCE, AS DWELLERS WOULD, LEFT TO THEIR DEVICES LONG
ENOUGH, TURN INTO WORLD EATERS, SPELLING DOOM FOR ALL.

"ARMED WITH KNOWLEDGE AND POWER, SOLSTICE WARRIORS WERE PATROLLING THEIR
WORLD, TRACKING DWELLERS TO DETERMINE WHICH ONE WOULD HAVE TO BE TAKEN
DOWN DURING EACH ECLIPSE. IF THEY KEPT THEIR GUARD UP, THERE MAY NEVER BE
A WORLD EATER, BUT RESH'AN KNEW IT WAS ONLY A MATTER OF TIME UNTIL THE
FLESHMANCER DEVISED AN EVEN MORE WICKED PLAN.

"IN A DESPERATE ATTEMPT TO GET AHEAD, RESH'AN BOLDLY PERFORMED
TRANSMUTATION ALCHEMY ON THE VERY SPACE-TIME CONTINUUM, BREAKING REALITY
DOWN INTO COUNTLESS TIMELINES AND PARALLEL UNIVERSES. HE THEN HUNG UP
HIS ALCHEMY VIAL AND TOOK UP THE MANTLE OF ARCHIVIST, SETTING OUT ON AN
ENDLESS JOURNEY ACROSS ALL REALITIES, CATALOGING EVERY SINGLE POSSIBLE
OUTCOME IN SEARCH FOR A RESOLUTION TO THE THROES OF THE FLESHMANCER.
MEANWHILE, AEPHORUL REJOICED AT THE SEEMINGLY INFINITE POTENTIAL FOR
DESTRUCTION HE HAD JUST BEEN OFFERED.

"AND SO THIS GAME OF CAT AND MOUSE, PLAYED BY DWELLERS AND SOLSTICE
WARRIORS ON ONE LEVEL, AND BY RESH'AN AND AEPHORUL ON ANOTHER, TOOK PLACE
ACROSS INFINITE TIMELINES. WHILE SOME WERE GETTING LOST TO WORLD EATERS,
OTHERS WERE CLEANSED AND RECLAIMED BY HEROES WHO WOULD KNOW PEACE,
PROVIDED THE FLESHMANCER NEVER SET FOOT IN THEIR REALM AGAIN."

Echoes of The Void[]

A few minutes after the three Voidwalkers left The Void, each one received a vision. When the three images were pieced together, it formed the full "Echoes of The Void."

The Bowman statue in the Tower of Time, just above the shop.

The Queen of Quills statue in the Tower of Time.

The Creator statue in the Tower of Time.

The Iron Hood statue in the Tower of Time.

The Queen of Quills, The Creator, and The Iron Hood statues, making a second appearance in the Tower of Time.

Screenshot from the Picnic Panic DLC trailer, showcasing the stone slab with the word "TUWHERA."

The Picnic Panic version of the shop. A rock with the letter P sits on a shelf.

Three books from The Archives.

Stone tablets to be inserted into a timeline.

Stone tablets inserted into the timeline. 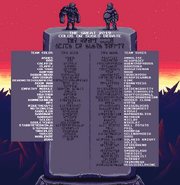 Captions for the "Colos or Suses Debate" stone tablet.

The initial version of Archivist Scroll 3 which has a typo of "FLESHMANCHER." 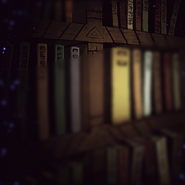 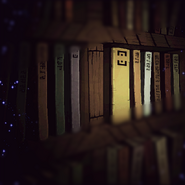 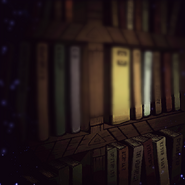