The Abomination, or Abomination Beyond Words, is a boss encountered in the Corrupted Future. In terms of gameplay, it is very distinct in that it cannot be damaged. Instead, Ninja has to escape the creature in a chase sequence.

The Abomination is a large purple creature. Its body is so large that it covers half the screen, and its entire body is not visible to the player. It has sharp teeth and tiny arms with claws. The portion of its body that is visible to the player seems to be covered in holes, which could potentially be either mouths or eyeholes. Due to its immense size, its body is quite high-resolution in comparison to most of the other sprites found in the game. 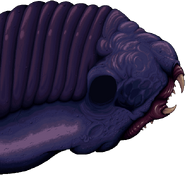 Spritesheet of bubbles that appear as the Abomination rises out of the water. 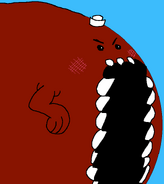